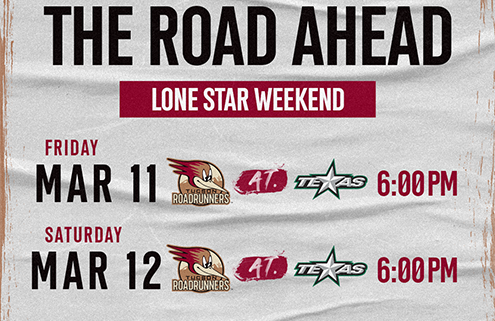 The Roadrunners close out their five-game road trip with a pair of matchups against the Texas Stars Friday and Saturday at the H-E-B Center in Cedar Park, Texas. The series wraps up a stretch that saw Tucson travel to Ontario, Bakersfield and San Jose to take on Pacific Division rivals last Wednesday, Saturday and Sunday. The weekend also marks the Roadrunners first out of division matchups since taking on the Iowa Wild in November. Tucson will return home to practice at the Tucson Arena before heading to the Lone Star State for the weekend.

The Roadrunners have 11 home games remaining in the regular season, with the next three taking place from Wednesday, March 16 to Saturday, March 19. The three-game set against the San Jose Barracuda will be jam-packed with fun for all fans, beginning with Go Green Night on March 16 at 6:30 p.m. MST. The first 1,000 fans to the game will receive St. Patrick’s Day-Themed Green Beads courtesy of Williams and Associates, and all fans can enjoy a Concession Special of Corned Beef Sliders, Cabbage, and Potatoes with a Draft Beer or Soft Drink. The food specials will continue on Friday, March 18 with another 3-2-3 night for the family. The Tucson Arena will be offering $3 Hot Dogs, $2 Soft Drinks and $3 Draft Beers to help celebrate First Responders Night and Ladies Night. Rounding out the weekend will be Hockey is For Everyone Night presented by O’Rielly Chevrolet on Saturday, March 19. The first 1,500 fans will receive a Dusty Poster upon entrance, with special Hockey is For Everyone and Family ticket packs available to purchase. The Hockey is For Everyone pack includes a ticket, a $5 Concessions Voucher and a Hockey is For Everyone T-Shirt, while the Family Pack includes four tickets and $20 in Concessions Vouchers for $40 in savings. For more information on the fun-filled weekend and to purchase tickets, click HERE.

Tucson will face Texas for the final two times this weekend, after the Roadrunners and Stars previously faced off at the Tucson Arena on October 23 and 24. The series represented the Roadrunners Opening Weekend in the Old Pueblo after starting the season on the road. Tucson toppled Texas in the series opener by a score of 4-0, with forward Ben McCartney notching his first career AHL hat trick in the win. Four of McCartney’s first six outings in the AHL dating back to last season were against the Texas Stars, with the 21-year-old tallying five points (4g 1a) against the Dallas Stars AHL affiliate. The Roadrunners were a perfect 7/7 on the penalty-kill in the series opener, as goaltender Ivan Prosvetov recorded his second-straight shutout to begin the season.

Roadrunners defenseman Matt Foley netted his first career American Hockey League goal in Tucson’s last contest on Sunday, March 6. Foley found the back of the net with just 2:26 gone by in the third period, tying the game at 2-2 with the San Jose Barracuda. The goal was assisted by Cedric Lacroix for his first point of the season. Foley and Lacroix each joined the team during the same home stand in early January.

In Sunday’s matchup with the San Jose Barracuda, the Roadrunners skated a forward line consisting of Boko Imama, Tyson Empey and Cedric Lacroix. The trio have combined for 18 total fights this season, with Imama and Empey tied for the team lead at seven bouts apiece. Imama dropped the gloves in back-to-back games last weekend against Bakersfield and San Jose, while Lacroix has four fights since joining the team January 8, tied for most on the team during that span.

The First Of Many For Maccelli

Rookie forward Matias Maccelli played his first two games in the National Hockey league last week with the Arizona Coyotes as Arizona won both matchups against the Colorado Avalanche and Ottawa Senators. The 21-year-old made his NHL debut on Thursday, March 3 before netting his first career National Hockey League goal on Saturday, March 5. Maccelli’s family was in attendance for the special moment. Both games took place at Gila River Arena in Glendale, with Maccelli skating alongside Phil Kessel and Alex Galchenyuk, as the Coyotes outscored their opposition 10-6 over the pair of contests.

Defenseman Dysin Mayo had a career day with the Arizona Coyotes on Saturday, March 5. The rookie defender and longtime Roadrunner recorded his first career multi-point performance in the NHL with a goal and an assist in Arizona’s 8-5 win over the Ottawa Senators. Mayo was one of two players to finish the game with a team-leading plus-minus rating of 6, along with defensive partner Shayne Gostisbehere. The goal was Mayo’s fourth of the season, tied for second-most among Coyotes defensemen.

Hudson Heading Up I-10

The Arizona Coyotes announced Monday afternoon that Roadrunners Captain Hudson Fasching had been recalled to the NHL. The 26-year-old has 24 points (8g 16a) in 35 games with Tucson this season. Fasching has previously appeared in seven games with the Coyotes this season and becomes the second forward to be recalled in the last eight days, after rookie Matias Maccelli got the call to the National Hockey League last Monday.

With Matias Maccelli making his NHL debut with the Arizona Coyotes last week, the Roadrunners have now had seven players from their Opening Night roster make their National Hockey League debut this season. Dysin Mayo was the first to receive the call, as he scored a goal in his debut with the Coyotes on October 21. Cam Dineen and Ben McCartney were next, each making their debut on November 5 against the Anaheim Ducks. December also saw a pair of Roadrunners play their first games in the NHL, starting with JJ Moser on December 15 and Mike Carcone on December 28. Vlad Kolyachonok was the first to make his debut in 2022 on January 12, with Maccelli rounding out the list to date on March 3. Mayo, Moser and Kolyachonok were all a part of the defensive unit when Maccelli took the ice for the first time in the NHL.