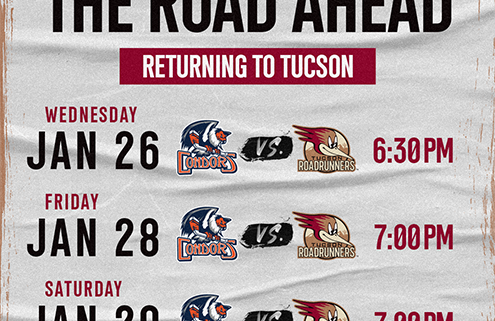 After the first meeting between the Roadrunners and Bakersfield Condors since early 2020 on Wednesday, January 19, the teams will meet at the Tucson Arena for three games Wednesday, Friday, and Saturday. The series will feature El Lazo de Tucson on Friday, January 28, followed by Star Wars night on Saturday, January 29. For more information on the series and to purchase tickets, click HERE.

Food Specials For The Fans

Along with El Lazo de Tucson on Friday and Star Wars Night on Saturday, the Roadrunners and the Tucson Arena are offering some delicious food specials during their series with the Bakersfield Condors. Wednesday night’s contest features a special of Kilt Lifter Brats with a Draft Beer or Soft Drink for $10. Friday night marks the next fan-favorite 3-2-3 night, with $3 Hot Dogs, $2 Soft Drinks, and $3 Draft Beers. Wrapping up the series on Saturday is a special Walking Taco with a Draft Beer or Soft Drink for $10.

Ten55 Brewing Company is still offering a special deal for the Roadrunners final three January home games this week against the Bakersfield Condors. Fans can purchase two game tickets and receive a $25 gift card to Ten55, a $125 value for just $49. More information on this special offer can be found HERE.

Producing On The Power-Play

The Roadrunners scored three power-play goals in their most recent game against the Ontario Reign on Sunday, January 23. Tucson now has five goals in their last four games while on the man advantage. Two of the scores belong to Michael Carcone, with Cameron Hebig, Jan Jenik, and Terry Broadhurst each adding another. Jenik leads the Roadrunners in power-play goals with five, while Carcone and rookie Matias Maccelli each have four.

Including his pair of power-play goals while on the Roadrunners six-game road trip, forward Mike Carcone possesses an active point streak of six games. The 25-year-old has eight points in as many games with Tucson dating back to December 18, with his NHL debut coming during the span on December 28 with the Arizona Coyotes. Carcone is a goal away from posting double digit goals and assists for the fifth-straight season, after leading the Roadrunners in goals last season with 15.

Along with Mike Carcone’s active point streak of six games, four other Roadrunners enter the week at home with scoring streaks of three games or more. Jan Jenik, Matias Maccelli, and Vlad Kolyachonok have each recorded a point in four-straight contests, while Travis Barron has a point in three consecutive outings.

Roadrunners forward Tyson Empey scored his first career AHL goal in the second period of Sunday’s matchup with the Ontario Reign. The goal came during a six-game road trip which saw Empey take on a larger role in the Roadrunners offense. The 26-year-old is in his first season with Tucson after making the roster out of the training camp.

With a goal in Sunday’s game against the Ontario Reign, Roadrunners forward Matias Maccelli became the fourth AHL rookie to tally double-digit goals and points on the season. The 21-year-old leads all rookies in assists with 23 and is one of six first-year skaters to average a point per-game with at least 20 games played.