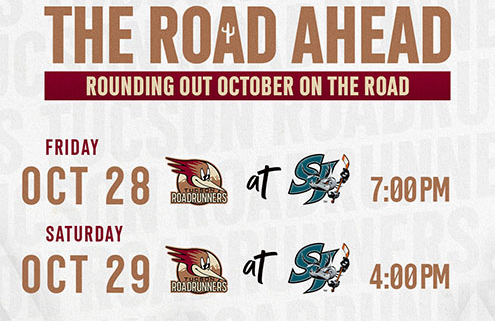 The 3-1-0-0 Roadrunners head to California for the first time this season to take on the currently undefeated San Jose Barracuda at the new Tech CU Arena. The Barracuda enter the week atop the AHL Pacific Division as they’ll host the Ontario Reign on Wednesday before Tucson comes to town for the weekend. The Roadrunners took on the AHL affiliate of the San Jose Sharks six times last season, with Tucson taking the first meeting of the year on the road at the SAP Center.

Tucson kicked off their 2022-2023 home slate with a pair of weekend matchups against the Bakersfield Condors Saturday and Sunday at the Tucson Arena. The Roadrunners won both contests by scores of 5-3 to improve to 3-1 on the season. Saturday’s win marked the fifth-straight victory on Opening Night in the Old Pueblo and was followed up on Sunday by Tucson winning again for their fourth Home Opener Series sweep out of five chances all-time. Off the ice, the team collected nearly 200 pounds of canned food on Opening Night for Impact of Southern Arizona and hosted a pregame Red Carpet Reception presented by the Arizona Daily Star, followed by a Pregame Trick-or-Treat and Postgame Skate on Sunday with Raytheon and the RTEAM. Cam Crotty, Nathan Smith, Ryan McGregor, Travis Barron, Adam Cracknell, Cameron Hebig, and Victor Soderstrom took the ice with Tucson fans after the second 5-3 win to complete the weekend sweep.

Dauphin Dazzles In Return To Tucson

Tucson Roadrunners forward Laurent Dauphin was named the AHL Player of the Week after his high-scoring weekend against the Bakersfield Condors. Dauphin tallied five points (4g 1a), including a hat trick, in his first two games back at the Tucson Arena since the 2018-2019 season. The 28-year-old is back with the organization that drafted him 39th overall in the 2013 NHL Entry Draft, and currently leads the Roadrunners in goals with four. An original Roadrunner, Dauphin appeared in 89 games for Tucson from 2016 to 2019 and served as an Alternate Captain during the 2018-2019 campaign.

The Roadrunners will spend the next four games on the road in San Jose and Calgary, but will return home on Friday, November 11 and Saturday, November 12, to host the Coachella Valley Firebirds for the first time ever. The two-game set will feature the first Faith and Family Night of the season with a magnetic schedule giveaway for the first 1,500 fans, presented by Proforma. The series will conclude with the Roadrunners Military Appreciation Night, featuring a pregame Hockey & Hops event as well as a post-game jersey auction. The jerseys auctioned off will be Tucson’s game-worn Military Specialty Jerseys, presented by VetTix. For more information and to purchase tickets, click HERE.

The Roadrunners continued their winning ways at home to start the year last weekend against the Bakersfield Condors. The two-game set marked the fourth time in seven years that Tucson has scored ten goals in their first two home games, after doing so in each of their first three seasons in Southern Arizona. In addition, Roadrunners goaltender Ivan Prosvetov earned the win in his first game at home for the fourth-straight season. Prosvetov has now jumped out to an individual record of 2-0 in each of his first four seasons in the desert.

The Roadrunners first ten goals this season were each scored by a different player, their longest such streak to start a year since the 2017-2018 season. Forward Jean-Sebastien Dea was the first Roadrunner to find the back of the net twice with a power-play goal late in the first period of Sunday’s 5-3 win over the Bakersfield Condors. Dea was followed up in the next two periods by Laurent Dauphin, who scored a hat trick to improve to four goals on the season. Overall, 16 Tucson skaters have recorded a point through four games this year, with forward Mike Carcone leading the way with six points (1g 5a).

Gillies Gets His First

Roadrunners goaltender Jon Gillies made his home debut for the Roadrunners on Sunday against the Bakersfield Condors and earned his first win of the season with a 23-save effort. Gillies is no stranger to Opening Weekends at the Tucson Arena, as he had the unique honor of being the opposing backstop in Tucson’s first-ever Home Opener on October 28, 2016, as a member of the Stockton Heat. The 28-year-old had taken on the Roadrunners 20 times in his career, all with Stockton from 2016 to 2020.

Streaks To Look Out For

The Roadrunners head to San Jose with three players possessing point streaks of three games. Defenseman Ronald Knot (1g, 2a) forward Mike Carcone (1g, 5a) and forward Jean-Sebastien Dea (2g 2a) have all contributed to Tucson’s offense in each of their last three outings. In addition, defenseman Cam Dineen (1g 2a), forward Jan Jenik (2a), forward Adam Cracknell (1g 2a), and forward Laurent Dauphin (4g 1a) all recorded at least a point in each of the Roadrunners wins over Bakersfield last weekend.

A new episode of the Tucson Roadrunners Insider Podcast dropped after Sunday’s 5-3 win to close out the weekend. “Voice of the Roadrunners” Adrian Denny and TucsonRoadrunners.com’s Jimmy Peebles broke down the two-game set with Bakersfield and looked ahead to Tucson’s upcoming road trip. The podcast, including interviews with Hudson Elynuik, Mike Carcone, and Boko Imama, can be found on the iHeartRadio App. In addition, Roadrunners Happy Hour airs every Tuesday at 5 p.m. on FOX Sports 1450AM and the iHeartRadio app, with a podcast version also available after each episode on the iHeartRadio app. This week, co-hosts Adrian Denny, Brett Fera, and Kim Cota-Robles will be joined by Roadrunners forward and reigning AHL Player of the Week Laurent Dauphin.