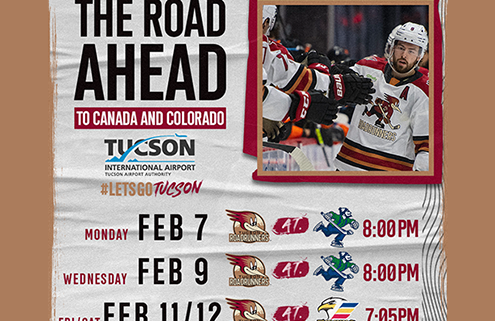 Tucson Roadrunners Road Ahead: To Canada And Colorado

The Roadrunners play out the rest of their six-game road trip this week with two-game sets against the Abbotsford Canucks and Colorado Eagles, as they look to make it three wins in their last four contests on Monday. The week begins with a pair of games in Abbotsford Monday and Wednesday, with Tucson looking to remain undefeated against the Canucks on the season after a pair of wins in Tucson November 26 and 27. The Roadrunners will round out the week with back-to-back matchups in Colorado Friday and Saturday.

Tucson won game two of their opening series on the road against the San Diego Gulls Saturday, marking their first weekend at the Pechanga Arena since February 7, 2020. San Diego took the series opener Friday night, but the Roadrunners came back to win Saturday’s matchup 5-4. Tucson fell behind 1-0 in the first period but scored five goals in the span of 19:23 to remain a point ahead of the Gulls in the standings. Mike Carcone scored his third-career AHL hat trick, along with three-point performances from Matias Maccelli (1g 2a) and Cam Dineen (3a). Goaltender Josef Korenar stopped 30 shots on goal, his most in a win this year. Tucson and San Diego remain even at two wins apiece against each other in the season series.

The Tucson Roadrunners will be back in the Old Pueblo on Saturday, February 19, to kick off a four-game home stand at the Tucson Arena. The Roadrunners will face the Henderson Silver Knights and Ontario Reign for two games piece over two weekends. The series with Henderson will be all about the youngest Roadrunners fans, as the first 1,500 kids 12 and under at Saturday’s game will receive a Youth Kachina Jersey courtesy of Dental Pros. The next day, all kids 12 and under can see the Roadrunners 4:00 p.m. matchup with the Silver Knights for free with a paying adult, along with a special offer of $6 Kids Meals. The following weekend of Saturday, February 26 and Sunday, February 27 marks Cancer Awareness Weekend. The Roadrunners will wear their specialty Cancer Awareness Jerseys for both contests against the Ontario Reign, with a portion of ticket sales going to the American Cancer Society. For information on both weekends and to purchase tickets, click HERE.

In the series finale with the San Diego Gulls, Roadrunners forward Mike Carcone recorded his fourth career hat trick and second with Tucson. The 25-year-old scored a pair of goals in the opening frame, then completed the hat trick with 7:24 remaining in the second period. Carcone matched his goal total from last season with 15, which currently leads the team. He could become the first player in Roadrunners franchise history to lead the team in goals for back-to-back seasons. Carcone’s hat trick marks the fourth for Tucson this season and second against the Gulls, after Hudson Fasching tallied a five-point night (3g 2a) against San Diego on October 30 in the Old Pueblo.

Along with Mike Carcone’s hat trick, Matias Maccelli and Cam Dineen also posted three-point performances in Saturday night’s matchup with the San Diego Gulls. Dineen tallied an assist on each of Tucson’s first three goals for his first-career three-point night in the AHL, and first multiple-point outing in eight games with the Roadrunners this season. The effort put Dineen at a point-per-game average with Tucson this season, split by a 14-game stint in the NHL with the Arizona Coyotes. Maccelli notched a goal and two assists for his third-consecutive multiple-point performance, and team-leading tenth of the season.

With a goal in Saturday’s 5-4 win, forward Cameron Hebig became the fourth Roadrunner to reach ten goals on the season, joining Mike Carcone, Matias Maccelli, and Jan Jenik. Hebig is just one goal away from matching his career-high for a season at 11, which he accomplished in his rookie campaign with the Bakersfield Condors in 2018-2019. The 25-year-old can also become the fourth Tucson skater with double-digit goals and assists this season, as he is currently at nine assists on the year.

The Roadrunners will be traveling north of the border this week for the first time since April 2017, when they took on the Manitoba Moose for a pair of games in Winnipeg. Tucson currently has a 2-0 record against the Abbotsford Canucks in their inaugural season, after back-to-back come-from-behind wins at the Tucson Arena November 26 and 27. The 2021-2022 season also marks the second-straight season where the Roadrunners faced a team for the first time, after the Henderson Silver Knights joined the AHL Pacific Division last year.