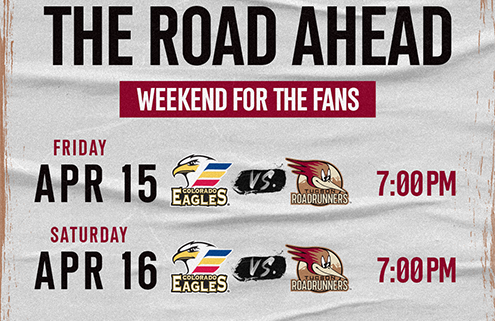 Tucson Roadrunners Road Ahead: Weekend For The Fans

The Roadrunners return home for the final two meetings of the season with the Colorado Eagles Friday and Saturday at the Tucson Arena. The Eagles come to the Old Pueblo for the second time this season, with their first trip coming January 8 and 9. The series opener marked the Roadrunners debut of forward Cedric Lacroix, who dropped the gloves in the first period on January 8 for his first of four fights with Tucson this season. The Roadrunners tallied three power-play goals across the pair of games, including one to erase a third-period deficit and force overtime on January 8.

The Roadrunners returned to the Old Pueblo Monday from Rockford by way of Tucson International Airport. The second busiest airport in Arizona features seven airlines flying nonstop to 23 destinations across the United States and Canada. With more than 134,400 landings and takeoffs annually, Tucson International Airport (TUS) ranks as the 65th busiest airport in the country.

A Weekend For The Fans

The Roadrunners will be celebrating Fan Appreciation Weekend this Friday and Saturday at the Tucson Arena, presented by Dave and Buster’s. Both games will feature $2 popcorn and before and after Friday’s contest, fans can head to Dillinger Brewing Company at 402 East 9th Avenue for $5 Roadrunner Reds. Saturday’s series finale will feature the second Hockey and Hops pregame event at 4 p.m. with over a dozen local Tucson Breweries, before the Roadrunners and Eagles face off on The CW Tucson for the final televised game of the season. For more info on the fan-favorite event, click HERE. The first 2,500 fans Saturday will also receive a Roadrunners Team Poster.

Saturday’s matchup with the Colorado Eagles will be the sixth and final televised Roadrunners contest this season. The game will be broadcast live in Southern Arizona on The CW Tucson, along with the usual ways to listen or watch on AHLtv and FOX Sports 1450AM. Saturday’s series finale with Colorado is the second televised game between the Roadrunners and Eagles on the season, after a Saturday, January 8 matchup that went to a shootout at the Tucson Arena.

Tucson’s special teams continued to impress over the weekend against the IceHogs in Rockford. The Roadrunners tallied a pair of power-play goals while fending off all four of Rockford’s man-advantages in the pair of meetings at the BMO Harris Bank Center. Entering the weekend with Colorado, Tucson has seven power-play strikes in just six meetings with the Eagles on the season. The Roadrunners penalty-kill unit is 20-for-23 this season against a Colorado team that ranks fourth in the Pacific Division for power-play percentage on the road, just behind the Roadrunners.

Last weekend’s two-game set with the Rockford IceHogs marked the final out-of-division matchups this season for the Roadrunners, after four games apiece against the Texas Stars, Iowa Wild, and IceHogs from the AHL Central Division during the 2021-2022 campaign. Tucson’s final seven games will all be against Pacific Division rivals, as they’ll face the Colorado Eagles (two games), Stockton Heat (one game), Bakersfield Condors (one game), and San Diego Gulls (three games) to close out the regular season.

The Arizona Coyotes announced Monday afternoon that forward Jan Jenik had been assigned to the Tucson Roadrunners after a seven-game stint with the Coyotes. Jenik returns to Tucson as the active team leader for goals (16), assists (23) and power-play goals (8). The 21-year-old last played for the Roadrunners on Saturday, March 26 and has four points (1g 3a) in his last four outings with Tucson. Jenik posted his first multiple-point performance in the NHL on March 30, with a pair of goals against the San Jose Sharks.

Over the last month, the Roadrunners have signed five players out of college who have made their pro debuts. Four of the recently acquired skaters registered at least a point during the weekend against the Rockford IceHogs. Forwards Colin Theisen (1g 1a), Oliver Chau (2a), Mitch Lewandowski (1g) and defenseman Brandon Estes (2a) all contributed to Tucson’s offense over the pair of games in Rockford. The four have combined for 27 games played with the Roadrunners, led by Lewandowski with 12 appearances.

Newest Tucson goaltender Rasmus Korhonen made his North American professional debut on Sunday, April 10 against the Rockford IceHogs. Korhonen made Roadrunners franchise history as the youngest player to debut for the team, taking a record previously held by current forward Ben McCartney by four months. The 19-year-old stopped 24 saves in his first action with the Roadrunners after being drafted by the Arizona Coyotes in the fourth round (#122 overall) of last year’s NHL Draft. Korhonen is the second player from the Coyotes 2021 draft class to appear with the Roadrunners, after defenseman JJ Moser skated in 18 games earlier this season for Tucson.