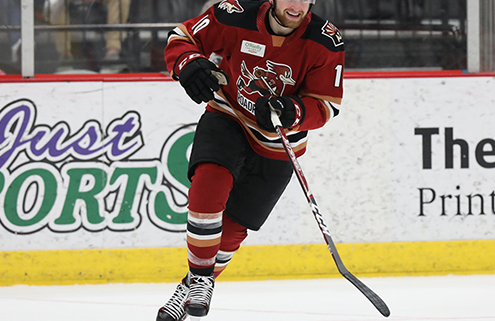 GLENDALE, ARIZONA — Arizona Coyotes Interim General Manager Steve Sullivan announced today that the Coyotes have signed forward Blake Speers to a one-year, two-way contract. As per Club policy, terms of the contract were not disclosed.

The 23-year-old Speers recorded 4-5-9 with 20 penalty minutes (PIM) in 32 games with the Tucson Roadrunners (AHL) this season. He also registered 0-1-1 with four PIM in 10 games with the Binghamton Devils (AHL).

He was originally drafted by New Jersey in the third round (67th overall) in the 2015 NHL Entry Draft.

Tucson Notes
-Was tied for Tucson team lead with three goals against San Diego
-Appeared in all 32 games with Tucson after being assigned by Coyotes following trade.
-One of six Roadrunners to skate in all 32 games during that stretch.
-Teammate of four-year Roadrunner Michael Bunting with Soo Greyhounds (OHL) from 2013-2015.