“Jay and I are very pleased to name Michael as our fourth captain in franchise history,” said Roadrunners General Manager Steve Sullivan.  “With Michael as our leader and three very strong alternate captains working alongside him, we are very confident that this group will use their experience to both lead and guide our dressing room.”

This will be Chaput’s first time serving as a team captain in his pro career.  The 27-year-old forward previously served as an alternate with Lake Erie (AHL) in 2015-16 and Laval last season prior to arriving in Tucson.

“When Michael came in last year, he stabilized our group,” Head Coach Jay Varady said in reference to the new captain being acquired by the organization in February.  “He’s the type of player that with his experience and the way he goes about his business, he’s a leader in every aspect.  Last year we got the chance to see that on a night-in, night-out basis and we’re really happy to have him leading our group.”

Both Bunting and Russo served as alternates for the Roadrunners during the 2018-19 season and will serve the same role once again this season, joined by Andy Miele. 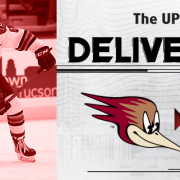