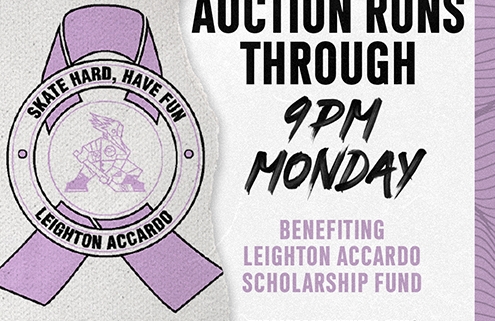 Tucson, Arizona – The Tucson Roadrunners, owned and operated by the Arizona Coyotes, will wear a special helmet sticker to honor Leighton Accardo for the remainder of the season starting with tonight’s game with the Colorado Eagles at 6:30 p.m.

Accardo, who was beloved by the Coyotes organization, passed away on November 24, 2020 after a courageous battle with cancer. She was inducted into the Arizona Coyotes Ring of Honor on Saturday, April 17 becoming the first former individual who is not player, coach, general manager, or broadcaster, to be inducted into a team’s Ring of Honor in Arizona and the entire NHL.

In addition, this weekend, the Roadrunners will be auctioning off autographed helmets featuring: Frederik Gauthier, Jan Jenik, Barrett Hayton and Victor Soderstrom; along with signed sticks from several Roadrunners including: Cam Dineen, Tyler Steenbergen, Jeremy Gregoire, Dysin Mayo, Brayden Burke, Jordan Schmaltz and Ivan Prosvetov. The auction will go through Monday at 9 p.m.at TucsonRoadrunners.com/SkateHardHaveFun. All proceeds will go to the Leighton Accardo Scholarship Fund which provides financial assistance to girls interested in playing hockey in Arizona.

The Roadrunners also host Colorado Friday at 7 p.m. for the team’s next El Lazo De Tucson game to commemorate all that is Southern Arizona. The series wraps up Sunday at 1 p.m. with First Responders Day and the team’s next television broadcast on The CW Tucson.

Tickets for all three games are available at TucsonRoadrunners.com/WelcomeBack.