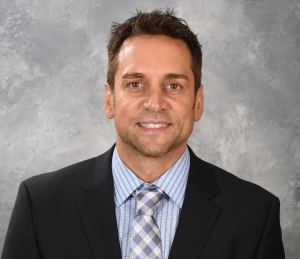 Steve Potvin was named the Roadrunners Head Coach on January 22, 2020 following the promotion of Jay Varady to the Arizona Coyotes staff. He enters his fourth season with the Tucson Roadrunners after spending the previous three seasons as an Assistant Coach and the 2016-17 campaign involved with Tucson as well as the Arizona Coyotes Skills Coach where his focus was on player assessment and individual skill improvement.

In the Roadrunners first three seasons with Potvin on the coaching staff, Tucson has won two Pacific Division Championships (2017-2018, 2019-2020) and had a record of 112-65-11-6. The 2019-2020 Roadrunners finished fourth in the league in goals-per-game and featured three of the league’s top 15 scorers under Potvin’s direction of the forwards and power-play.

Steve and his wife, Nada, have three children: Max, Nash and Eliana. 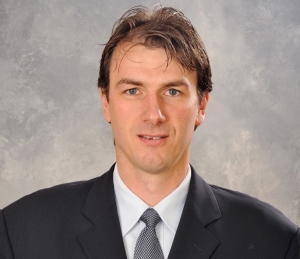 Slaney previously spent four seasons as an assistant coach with the Portland Pirates (AHL). He started with the Pirates in 2011-12 after finishing his playing career with Plzen HC (Czech) following the 2010-11 season.

Leaving his mark as one of the best defensemen in AHL history, Slaney joined the Pirates coaching staff with a wealth of accolades. Slaney was a two-time recipient of the Eddie Shore Award (given annually to the AHL’s top defenseman) with the Philadelphia Phantoms in the 2000-01 and 2001-02 seasons, and also won a Calder Cup championship with the Phantoms in 2005.

He was inducted into the Wilkes-Barre/Scranton Penguins Hall of Fame in 2016.

A member of the Penguins inaugural team, Slaney appeared in 89 games
with Wilkes-Barre/Scranton during parts of two seasons (1999-2001), recording 42-68-110 points. Slaney became the AHL’s all-time leading scorer as a defenseman in 2005-06 until his mark (519 career points) was surpassed by Oklahoma City’s Bryan Helmer.

The 48-year-old native of St. John’s, Newfoundland was originally drafted by Washington in the first round (ninth overall) of the 1990 NHL Entry Draft.

He and his wife, Brenda, have a son, Tyler, and daughter, Julia. 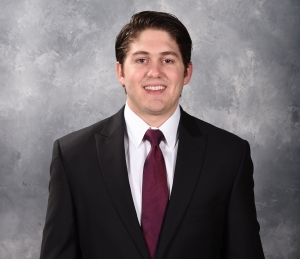 Brady joined the Roadrunners in August 2016 after working with the Seattle Thunderbirds (WHL) as a Hockey Operations Assistant for one season. Raised in Phoenix, Arizona, he attended Arizona State University where he received a degree in Business Communication. He served as a Hockey Operations Intern with the Arizona Coyotes for two seasons from 2013-15. 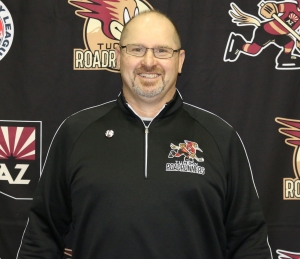 Eric joined the Roadrunners in July 2016 after working for the Coyotes’ ECHL affiliate Rapid City Rush. A native of Kalamazoo, Michigan, he studied at Kalamazoo Valley Community College. He has a lengthy career working in professional hockey with the Fort Worth Fire (CHL), St. Louis Blues (NHL), Kalamazoo Wings (UHL, IHL, ECHL), and the Nurnberg Ice Tigers (DEL). He currently resides in the Sabino Canyon area of Tucson with his wife Nicki, their three children Gavin, Hannah and Caden, and their dog Ollie. 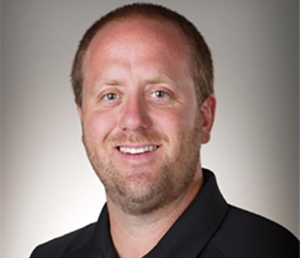 Bill joined the Roadrunners in August of 2019 as the team’s Head Athletic Trainer after spending the last 20 years as the Head Athletic Trainer, Equipment Manager and Production Manager for the Omaha Lancers of the USHL. He also spent four years as the Head Athletic Trainer for Indoor Football’s Omaha Beef. He is a graduate of Northwest Missouri State University where he studied Education and Biology. He played football (defensive end) his freshman year before switching to the medical side of sports. He was also a member of Sigma Phi Epsilon. Bill and his wife Nichole have four children: daughter Alex, 19 (Sophomore, Nebraska) and sons William, 18 (Freshman, Princeton), Sawyer (8) and Keaton (3). Their dog Ari is a German Shepard/Boston Terrier and Opie is a Boxweiler. Billy was born in Dekalb, Illnois. 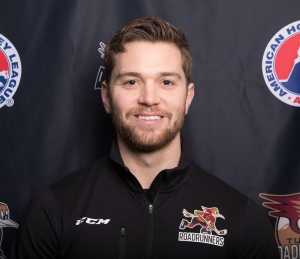 Matt joined the Roadrunners in August 2016 upon relocating from New Hampshire after working as the Head Athletic Trainer and Head Strength and Conditioning Coach for the Manchester Monarchs (ECHL affiliate of the LA Kings) in 2015-16. The International Falls, Minnesota native studied Sports Medicine and Exercise Science as an Undergraduate Student at the University of North Dakota (2008-2013), and was in the Kinesiology Program at the University of North Dakota’s Graduate School studying Exercise Physiology, Sports Nutrition, and Sports Psychology (2013-15). He was previously a Strength and Conditioning Coach and a Hockey Skills Coach at The Ralph Engelstad Arena Hockey Academy (2011-2015), an Intern with the Okanagan Hockey Academy the summer of 2012, and a Student Athletic Trainer and Student Strength and Conditioning Coach with the University of North Dakota Men’s Hockey Program (2016 NCAA D1 Hockey National Champions) for the 2012-2013 season. Matt is a Certified Athletic Trainer and a Certified Strength and Conditioning Specialist. He currently resides in Marana, Arizona with his girlfriend Brittany and their dogs Nash and Rango. 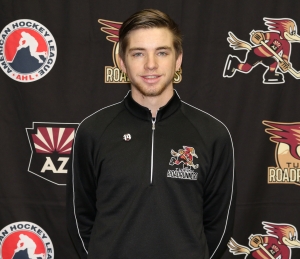 Ryan joined the Roadrunners in August 2016 from Phoenix after serving as a home locker room attendant for the Arizona Coyotes’ for two seasons. A native of Scottsdale, Arizona, he also worked as the Assistant Manager of the Pro Shop at the Coyotes’ practice facility for four years. He is currently attending Scottsdale Community College online, pursuing a degree in Business Management. He currently resides in East Tucson with his blue-nosed pit-bull, Moe. 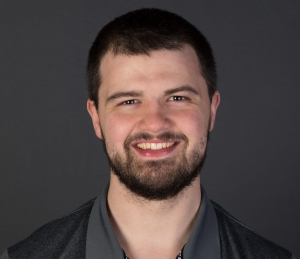 Jordan joined the Roadrunners for the 2018-2019 season after serving as a Resident Athletic Trainer for the University of Minnesota-Duluth and their 2018 Men’s Frozen Four Championship Team. He earned his Bachelors of Science in 2014 from the University of Nebraska-Omaha and earned his Masters of Arts in Athletic Training from them in 2017 as well. The Omaha native worked with the Omaha Lancers of the USHL and the hockey team at University of Nebraska-Omaha during his schooling as well. He is a Certified Athletic Trainer and a Certified Strength and Conditioning Specialist along with a member of the Professional Hockey Athletic Trainers Association (PHATS). He lives in Northwest Tucson with his Girl friend Taylor and dog Rooney. 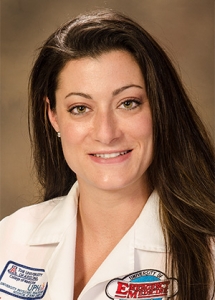 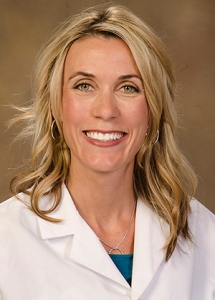 Dr. Beach has a special interest in treating sports related concussions and is a Certified Impact Credentialed Specialist. Along with her medical team she helps to provide athletes with evidence-based evaluations and treatment plans to help them safely return to sports, school and all other activities as soon as possible. She also enjoys treating competitive and recreational athletes of all ages for musculoskeletal injuries and sports related medical conditions. 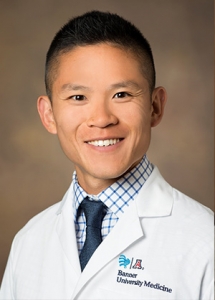 Dr. Denq believes in a well-rounded, evidence-based, and patient-centric approach to sports medicine. He is able to evaluate and manage patients of all ages and specializes in utilizing new technologic adaptations such as ultrasound for both diagnostic and therapeutic reasons. 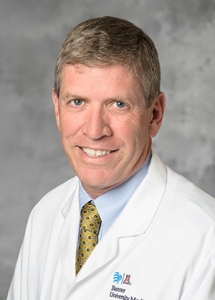 Dr. DeSilva’s area of special expertise focuses on traumatic/post-traumatic reconstruction of the elbow, forearm, wrist and hand. His research and clinical interests include management of bone loss in the upper extremity, distal radius fractures and soft tissue coverage of traumatic wounds.

Now in Tucson since 2007, Dr. DeSilva, wife Christine, and five children are vibrant members of the Tucson community. Dr. DeSilva serves as team physician and hand surgery consultant for the University of Arizona athletic department, site physician for the Nova Home Loans Arizona Bowl, and tournament physician for the ITF professional tennis tournaments held in Tucson. He loves taking care of all orthopedic conditions of the hand, wrist, and elbow and cherishes getting athletes back to play the game they love. 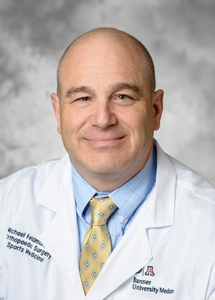 Dr. Michael Feldman is the Director of Sports Medicine at Banner – University Medicine in Tucson.  He is a Board Certified, Fellowship-trained Orthopedic Surgeon with a Certificate of Added Qualification (CAQ) in Sports Medicine.  He has a special interest in arthroscopic and minimally invasive surgery of the hip, knee, shoulder and ankle.

In April of 2015, Dr. Feldman was the recipient of the prestigious Stephen J. Snyder Excellence in Teaching Award from the Arthroscopy Association of North America (AANA) which annually recognizes the most outstanding teaching physician that values AANA’s mission to promote and foster the professional development and knowledge of arthroscopic surgery.

Dr. Feldman is a retired war veteran of United States Army Reserve, having attained the rank of Lieutenant Colonel and has performed active duty service in Iraq, Kosovo and Germany. He currently resides with his family in Tucson, AZ. 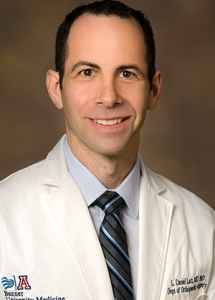 Dr. Dan Latt is a Banner – University Medicine physician specializing in Orthopaedic Surgery for the knee, foot, and ankle. He is an Associate Professor with Tenure of Orthopaedic Surgery and Biomedical Engineering at the University of Arizona and is a board-certified orthopaedic surgeon.  He specializes in the care of injuries of the knee, ankle and foot.  He is an expert in the treatment of tendon problems, arthritis, and complex deformities of the lower extremity.

Dr. Latt earned his medical degree from The University of Pittsburgh in 2002. He completed residency training in orthopaedic surgery at McGill University in Montreal, in 2007.  He is fellowship trained in both sports medicine (Kaiser, San Diego 2008) and foot and ankle surgery (Duke University, 2009).

Dr. Latt is the founder and medical director of the Dance Medicine Clinic at the University of Arizona School of Dance. He currently serves as the Medical Director of the Orthopaedic Surgery Service at Banner – University Medical Center South and as chair of the credentials committee.

In addition to his medical degree, Dr. Latt has a PhD in Bioengineering (University of Pittsburgh, 2001). He maintains an active research program in orthopaedic biomechanics.

When not at work, Dr. Latt enjoys cycling and rock climbing. 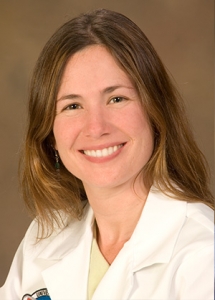 Dr. Waterbrook’s special interests include using ultrasound at the bedside to both diagnose and treat musculoskeletal conditions. When she is not at work she enjoys traveling and spending time with her husband and 4 children. 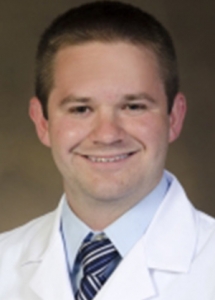 Dr. James Dill is a Banner – University Medicine physician specializing in Emergency and Pediatric Medicine. He is currently a Fellow in the Primary Care Sports Medicine Fellowship through the University of Arizona. His interest in medicine began after living for several years at a missions hospital in Cameroon, Africa, when he was in middle and high school. He began studying medicine at LSU Health Sciences Center in New Orleans, then moved to Tucson where he was a resident in the combined Emergency Medicine and Pediatrics program at the University of Arizona. After graduating from residency in 2019, he started his sports medicine fellowship at UA that same year. His interests are global health, pediatric sports and emergency medicine, and long-distance hiking/thru-hike medicine. 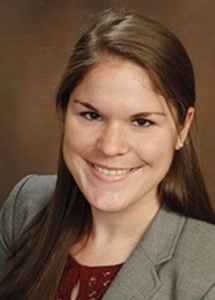 Dr. Aimee Monahan is a Banner – University Medicine physician specializing in Family Medicine. She is currently a Fellow in the Primary Care Sports Medicine Fellowship through the University of Arizona. Dr. Monahan was born and raised in New York. She received her medical degree from New York College of Osteopathic Medicine. She completed her residency in Family Medicine from Rowan University and is board certified in family medicine. Growing up, she played softball and field hockey, which is what sparked her interest in the field of sports medicine. In her free time, she enjoys hiking with her fiancé, baking, and exploring the restaurant scene in Tucson. She loves to travel, especially to beach destinations, and her favorite country she has visited so far has been Nepal. 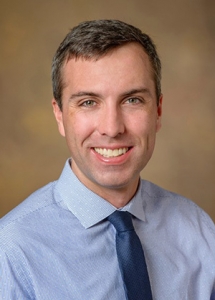 Dr. Brendan Parker is a Banner – University Medicine physician specializing in Emergency Medicine. He is currently a Fellow in the Primary Care Sports Medicine Fellowship through the University of Arizona. Dr. Parker grew up in Seattle, WA and graduated from Santa Clara University in 2009. Brendan went on to medical school at The University of Toledo College of Medicine and completed his Emergency Medicine residency at AMITA Health Resurrection Medical Center in 2019. Dr. Parker enjoys working with athletes at all levels and enjoys competing in marathons and triathlons in his spare time.