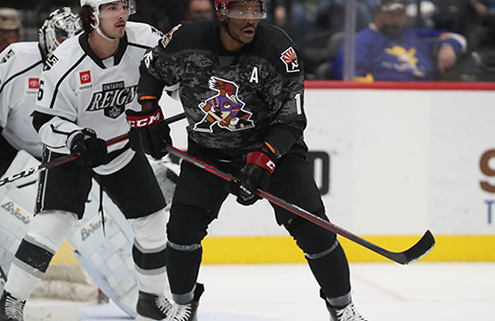 In his first season with Tucson, Imama has 12 points (5g 7a) in 54 games played. He leads the team in fights with 11 and ranks first in the American Hockey League for penalty minutes with 178. He is one of eight players to appear in at least 50 games with the Roadrunners this year.

Off the ice, Imama collaborated with the Roadrunners to create a t-shirt advocating an end to racism and inclusion for everyone in the game of hockey and beyond. With “Enough is Enough” on the front and “All for All for All” on the back, Roadrunners players and staff wore the shirts prior to their games on February 19 and 20. The shirts are available to purchase by going to TucsonRoadrunners.com/HDA with all proceeds going to the Hockey Diversity Alliance. Their mission is to eradicate racism and intolerance in hockey while inspiring a new and diverse generation of players and fans. For more information, visit their website at HockeyDiversityAlliance.org.

Imama spent his first four seasons in the AHL as a member of the Ontario Reign, totaling 35 points (16g 19a) in 153 games played. The 25-year-old was acquired by the Coyotes in a trade on July 24, 2021 along with Tucson teammate Cole Hults. His first appearance with Arizona will mark his National Hockey League debut, becoming the 8th Roadrunner to make their NHL debut this year and 15th player to appear with both the Coyotes and Roadrunners on the season.

The Roadrunners are currently on a three-game road trip in California, with their remaining matchups scheduled for Friday night against the Bakersfield Condors and Saturday night against the San Diego Gulls. Both games are slated to start at 7 p.m. MST. Tucson will then wrap up the 2021-2022 AHL regular season with a pair of contests against their I-8 Border Rivals, the San Diego Gulls at the Tucson Arena Thursday, April 28 and Friday, April 29. For more information and to purchase tickets, click HERE.