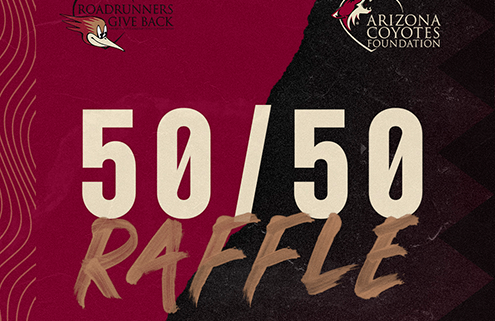 The weekly raffle will be conducted online and start every Monday at 10 a.m.; running until the following Monday at 9:30 a.m. Fans can purchase raffle tickets by clicking HERE.

Tickets are available in the following packages:

The Arizona Coyotes Foundation and Roadrunners Give Back proudly support local Arizona non-profits with the proceeds generated through the 50/50 raffle. A portion of proceeds from the “49 for $40” ticket package will help fund the Leighton Accardo Memorial Scholarship Fund.

Official rules can be found HERE. Please note: Must be at least 18 years of age and in the state of Arizona to purchase a raffle tickets.