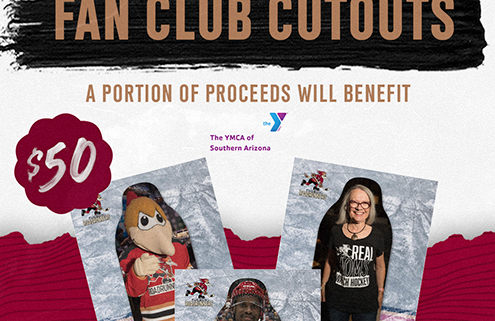 TUCSON, ARIZONA – The Tucson Roadrunners, owned and operated by the Arizona Coyotes, have partnered with the YMCA of Southern Arizona to give fans an opportunity to have a cardboard cutout of themselves in the Tucson Arena for the season.

The cutouts cost $50 and a portion of the proceeds will go to the YMCA of Southern Arizona. Fans are invited to get creative with their cutouts and they can include: themselves, a loved one or even a pet.

“A cutout is another way for Roadrunners fans to show their support of the team as well as support one of our special community partners,” said Roadrunners President Bob Hoffman.

The Roadrunners and Tucson Arena are in ongoing communication with Pima County and the City of Tucson regarding fan attendance as it pertains to health and safety for home games. Those details will be shared in advance of games throughout the season. Fan capacity for away games will be determined and announced by those organizations.