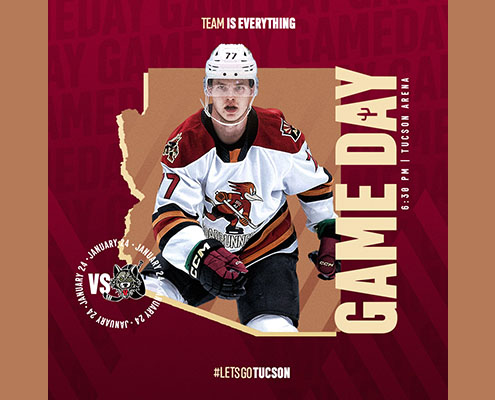 The Roadrunners continue their current home stand with a pair of midweek matchups against the Chicago Wolves, AHL affiliate of the Carolina Hurricanes. The Wolves are the defending Calder Cup Champions after defeating the Springfield Thunderbirds in five games last June, and enter the two-game set with Tucson off of back-to-back wins on the road. The series with Chicago marks the middle two contests of the Roadrunners current six-game home stand at the Tucson Arena.

Three Things
1) The Roadrunners are hosting the Wolves at the Tucson Arena for the first time since October 2019. The midweek series featured the third professional start by goaltender Ivan Prosvetov, who stopped 26 of 28 shots faced on October 29. In that same season, the Roadrunners earned back-to-back wins on the road in Chicago March 5 and 7. Tucson tallied back-to-back two-goal third periods in the series, including to overcome a late two-goal deficit to force overtime before winning in a shootout by a score of 3-2 on March 7. The Roadrunners outshot Chicago 62 to 40 over the two-game set, while current Tucson defenseman Cam Dineen notched an assist in the series opener. The two-game set was on the Roadrunners final road trip of the 2019-2020 campaign, when they went 3-1 on the way to a Pacific Division Championship. The Wolves are one of three AHL Central Division teams on Tucson’s schedule this season, along with the Texas Stars and Milwaukee Admirals.

2) Linemates Laurent Dauphin (two), Nathan Smith (two), and J.S. Dea (three) enter the midweek series against Chicago on multi-game point streaks after strong showings in the two-game set with Bakersfield. Over the weekend, Dauphin and Dea became the second and third Roadrunners skaters to reach 30 total points on the season, while Smith joined four other Tucson forwards with at least ten goals. The trio netted five of the eight total goals scored by the Roadrunners against the Condors, as Dauphin led the team in scoring with a goal and four assists.

3) The Roadrunners will have the AHL’s leading scorer on their roster when they host the Chicago Wolves on Tuesday, as the Arizona Coyotes assigned forward Mike Carcone to the Roadrunners Monday morning. Carcone leads the American Hockey League with 20 goals and 31 assists for 51 points in 32 outings this season with Tucson. He returns to the Roadrunners lineup on a franchise-record ten-game active scoring streak, with 20 total points (9g 11a) during that span. The 26-year-old is also atop the league in power-play goals (11) and power-play points (26), and his 1.59 points per-game average is the highest among AHL skaters with at least five games played.

“I think we’ve been playing some good hockey. It’s been a tough schedule lately, we just have to keep pushing in the right direction. Every game is important.”

Roadrunners forward J.S. Dea on the upcoming two-game set with the Chicago Wolves. Dea enters the week on a three-game point streak with two goals and three assists over his last three outings.

Number to Know
5 – The number of consecutive games where the Roadrunners have not allowed an opposing power-play goal, which represents the longest streak this season. Tucson’s penalty-kill has gone a perfect 11-for-11 during that stretch, including a four-on-three situation in overtime against the Bakersfield Condors on January 14. The Roadrunners have not gone shorthanded since the second period of the series opener with Bakersfield on January 20, as they outdrew the Condors three to nothing in trips to the man-advantage in the series finale on Saturday.

We’re Doing It Live
Tonight’s game will be broadcast live on AHLtv, as well as on the radio at FOX Sports 1450AM and the iHeartRadio app. Pregame coverage begins at 5:00 p.m. with a special extended pregame edition of Roadrunners Happy Hour with Adrian Denny, Brett Fera, and Kim Cota-Robles. Coverage continues at 6:15 p.m. with Roadrunners Warm-Up hosted by Jimmy Peebles, before “Voice of the Roadrunners” Adrian Denny has all the action from Tucson Arena.