With the home opening weekend in the rearview mirror, it’s time to continue the six-game stretch at Tucson Arena and find if the Roadrunners can build off of their impressive 4-1 start through the first five.

Enter, Iowa.  Coming southwest in a similar situation to that of which San Antonio came with last weekend, that being no regulation or overtime losses, the Wild hold a 5-0-0-1 record atop the AHL’s Western Conference, in the midst of a seven-game road stretch themselves.

Also touting 24 goals scored through their six games, the average of four goals per is the exact same for Tucson, leaving no doubt of the offensive capabilities from both sides.

1) Tonight’s two clubs enter with a combined record of 9-1-0-1.  Impressive, right?  But how has it gotten done?  As Brett Fera of the Arizona Daily Star pointed out earlier this week, Tucson’s foes this season have been tests, all compiling a combined record of 16-5-2-2 to this point.  Iowa, on the other hand, to no slight, has an opponents combined record of 8-13-1-1. Certainly it’s early and that’s not all-indicative, but take it for what it’s worth.

2) Going into last weekend the big “to do” for Tucson was continue the same hot starts that they had had on the road to start the season.  It didn’t necessarily happen in either game as both contests went to the second scoreless and involved Tucson coming from behind.  That’s good though, as it shows the adversity is there.  However, which style would you rather play?  Getting ahead from the hop or counting on four goals in the third to win?  Hopefully the hot starts return tonight.

3) By now you may be tired of hearing how important it is that Tucson has the same head coach for the second straight year or you understand how many returners the team has in their lineup, but the benefits of both of those items continue to show themselves in the early going.  Aside from the recalls to Arizona and one injury, there hasn’t been a ton of juggling in terms of personnel for Jay Varady’s lines thus far this season.  At this level when there are only a handful of days for training camp and maybe two preseason games, the first five games of the season are for many still a time in which coaching staffs are figuring out their roster.  This team hasn’t had to go through that and familiarity has allowed things such as last week’s comeback to come to fruition.

“It’s good, it’s good to be home.  Especially after the weekend we had, everybody’s pretty excited to be here for two more games.”

“We’ve got a good group of lines.  We’ve found four lines that we’re going to run with here for a little bit here and we’ve been playing pretty well.  If we keep playing hard, doing the right things and trusting each other, we’ll keep scoring goals. 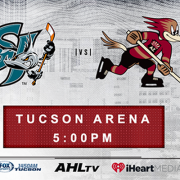