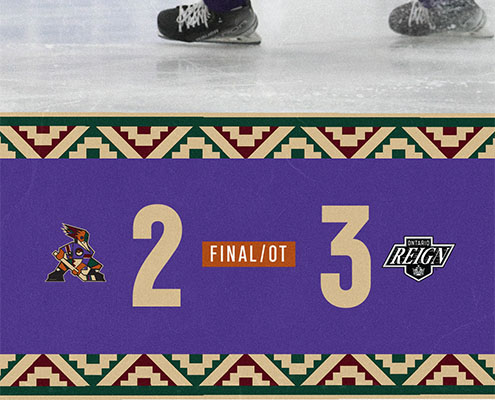 Tucson, Arizona – The Tucson Roadrunners wrapped up a weekend series with the Ontario Reign Saturday night with their third consecutive contest to go past regulation. Like Friday’s series opener, Tucson picked up a standings point as the Reign netted the game-winning overtime strike for a final score of 3-2. A crowd of 5,171 was on hand at the Tucson Arena to toss thousands of stuffed animals onto the ice after Travis Barron’s second-period score. Ivan Prosvetov started in net for the Roadrunners and matched his season high for saves with 38. Tucson moved to 10-7-4-0 on the season with the overtime defeat, marking the first time since January 2018 that the Roadrunners had taken three-straight games past regulation.

Roadrunners forward Travis Barron scored the special Teddy Bear Toss Goal for Tucson on Saturday against the Ontario Reign. The goal was Barron’s fourth of the season and evened the score at 1-1 with 6:01 gone by in the middle frame. Nicknamed “Bear,” the 24-year-old has tallied seven points (4g 3a) in his second season as a Roadrunner.

CRACKNELL AND CARCONE CONTINUE – Roadrunners linemates and team leaders Adam Cracknell and Mike Carcone kept their point streaks alive with Cracknell’s game-tying goal late in the third period. The goal was the Team Captain’s ninth of the season and represented his eighth point (4g 4a) over his last four outings. Carcone tallied an assist on the score for his team-leading 27th point of the year (8g 19a) and is tied for seventh in the American Hockey League overall. The 26-year-old Alternate Captain has recorded a point in six-straight appearances dating back to November 23 in San Diego, tied for a season high.

Tucson forward Travis Barron celebrates with Curtis Douglas, Victor Soderstrom and Vlad Kolyachonok after scoring the Roadrunners Teddy Bear Toss Goal on Saturday night against the Ontario Reign. Soderstrom recorded an assist on Barron’s special goal, along with forward Milos Kelemen. Immediately following the score, a crowd of 5,171 at the Tucson Arena launched countless stuffed animals onto the ice.

“[Victor] Soderstrom ripped the puck around to me and [Curtis Douglas], I took a shot on net, and suddenly the bears were flying… That was my first [Teddy Bear Toss Goal].”

Roadrunners forward Travis Barron on scoring Tucson’s Teddy Bear Toss Goal on Saturday against the Ontario Reign. The goal was Barron’s fourth of the season.

The Roadrunners and Reign kicked off Saturday’s series finale with a fight between Tucson’s Travis Barron and Ontario’s Austin Wagner. The bout was Barron’s fourth time dropping the gloves this season against his third different team. The fight was the fifth in four meetings between the Roadrunners and Reign this season, with each contest featuring at least one. Ontario scored the first goal of the night with 4:20 left to play in the opening frame, as they carried a 1-0 lead into the first intermission. With the Tucson Arena fans still holding onto their stuffed animals, the Roadrunner nicknamed “Bear” was the one to send them flying onto the ice. Forward Travis Barron scored the Teddy Bear Toss Goal with just over six minutes gone by in the middle frame to even the score at 1-1 and prompt a brief cleanup of thousands of bears that had found their way onto the ice. Once play resumed, the second period was without another goal as the Roadrunners and Reign entered the final 20 minutes of play knotted at 1-1. With 4:28 left in regulation, Ontario scored on their 39th shot of the game to take a late 2-1 lead. Tucson went on a late power-play with a chance to tie the game, and Captain Adam Cracknell came through with 1:06 left on the clock. His ninth goal of the season came on a 6-on-4 advantage and sent Saturday’s contest to overtime tied at 2-2. With 1:36 gone by in the three-on-three overtime period, the Reign lit the lamp to hand the Roadrunners their third consecutive overtime loss with a final score of 3-2. Tucson will remain at home and open a two-game midweek series with the Coachella Valley Firebirds on Tuesday at 6:30 p.m.

Tucson Roadrunners Road Ahead: Week For The Birds
Scroll to top