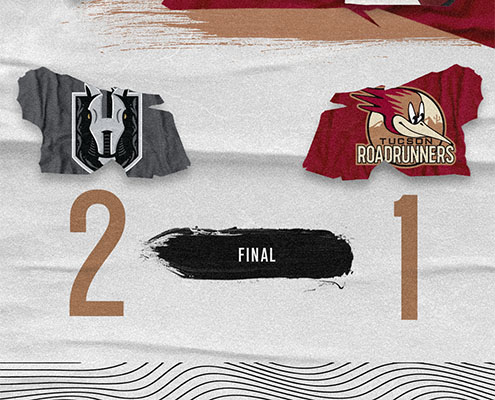 ROADRUNNERS CLOSE OUT PRESEASON SUNDAY AFTERNOON AGAINST THE SILVER KNIGHTS, WILL REMAIN IN HENDERSON FOR SEASON OPENER ON FRIDAY

Henderson, Nevada – The Tucson Roadrunners concluded the 2022 preseason slate Sunday afternoon with the second of two exhibition matchups with the Henderson Silver Knights. After coming away with a 5-2 win at home on Friday, the Roadrunners fell to the Silver Knights on the road by a score of 2-1. Returning forward Travis Barron had the lone goal for Tucson, while goaltender Ivan Prosvetov made his preseason debut for the Roadrunners and stopped 16 of 18 shots faced.

SHUTTING DOWN AT EVEN-STRENGTH – The Roadrunners finished the preseason having allowed only one goal while at even-strength across their pair of exhibition tilts with the Henderson Silver Knights. Tucson outscored Henderson two to one while skating five-on-five and six to four overall. In addition, the Roadrunners recorded 57 total shots on goal to Henderson’s 33 and outshot the Silver Knights in four of the six periods of preseason action.

Defenseman Cam Crotty made his preseason debut with Tucson Sunday afternoon after appearing in all 68 games last season with the Roadrunners. Crotty also suited up for one preseason contest with the Arizona Coyotes on September 24, against the St. Louis Blues. The 23-year-old enters his third season in the desert after being drafted by Arizona in the third round (#82 overall) of the 2017 NHL Entry Draft.

“The preseason is always an interesting time, you meet a lot of new teammates and are sometimes executing new systems. It’s a really valuable period for us, obviously we’re working out those kinks and getting familiar with those guys and those systems. We had two great games and went one and one, you can’t complain too much. There are some things we can clean up and get better at, but that’s exactly what the preseason is for.”

The Silver Knights opened the scoring 6:32 into the first period with a goal by Zack Hayes. The score gave Henderson their first lead of the preseason after Tucson got on the opening goal in Friday’s 5-2 win and never looked back. The goal was also the first and only even-strength score surrendered by the Roadrunners over the pair of exhibition contests with the Vegas Golden Knights AHL affiliate. Tucson and Henderson finished the first frame of action at an even six shots on goal apiece and each one-for-one on the penalty-kill, but the Silver Knights led 1-0. The Roadrunners made quick work to erase the deficit in the middle frame, with a goal by returning Roadrunner Travis Barron just 1:21 into the second period. The goal was Barron’s second point of the preseason (1g 1a), as Hudson Elynuik and Devante Stephens each earned their second assists in as many games. The Silver Knights retook the lead late in the middle frame with their first power-play goal of the contest and third overall of the preseason. The goal was scored by Lukas Cormier with just under three minutes to play in the period, as Tucson entered the final 20 minutes of play trailing by a goal. The Roadrunners outshot the Silver Knights in the third period by a count of seven to five but couldn’t find the back of the net. A pair of late penalties on the Roadrunners hindered their chance at a comeback, as Tucson fell to Henderson by a score of 2-1 to close out the preseason.