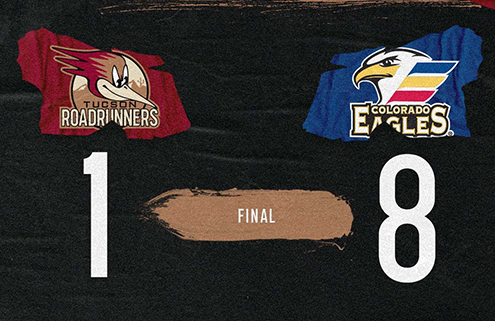 Loveland, Colorado – The Tucson Roadrunners wrapped up their six-game road trip Saturday night with the second-straight matchup against the Colorado Eagles. After jumping out to a 3-0 lead in the first period of Friday’s 3-1 win, the Roadrunners fell by a score of 8-1 to an Eagles team hungry for a win having dropped three-straight games entering Saturday. Goaltenders David Tendeck and Josef Korenar combined for 33 saves, as Tucson split the third and final series of the trip. Tyson Empey scored the goal for the Roadrunners in the second period, his second time lighting the lamp in his rookie AHL campaign.

After Tucson took a 1-0 lead just 1:11 into Friday’s series opener, the Eagles secured the first advantage in Saturday’s contest with 4:47 gone by in the first period. Colorado added another goal 42 seconds later, marking their two-fastest goals on the night. The hometown Eagles doubled their first-period lead to 4-0 by the end of the frame, with two of the four strikes coming from Kiefer Sherwood. The AHL affiliate of the Colorado Avalanche kept it up in the early goings of the middle period, stretching their lead to 5-0 with a goal 3:55 into the frame. The Roadrunners got on the board less than a minute after the halfway mark of the period, as Tyson Empey netted the second goal of his rookie campaign. The Eagles got one back less than five minutes later when Dalton Smith scored his second of the period, keeping their advantage at five goals. The remaining 4:21 of the middle frame and opening 9:12 of the third period marked the longest stretch of the contest without a goal but was broken by Colorado’s seventh goal of the game. Kiefer Sherwood completed the hat trick for his third three-point performance of the season, making the score 7-1. An additional goal from the Eagles with 7:37 still to play brought the final score to 8-1 in favor of Colorado, as the Roadrunners split both the opening and closing two-game sets of their road trip. Tucson netminders David Tendeck and Josef Korenar allowed an equal number of goals while combining for 33 total saves.

The Roadrunners return home for back-to-back weekends at the Tucson Arena where they’ll host the Henderson Silver Knights and Ontario Reign for a pair of games each. The first game with the Silver Knights is scheduled for Saturday, February 19 at 7:00 p.m. MST with coverage beginning at 6:45 on Fox Sports 1450AM with Roadrunners Warm-Up hosted by Jimmy Peebles. Then, “Voice of the Roadrunners” Adrian Denny will have all the action live from the Tucson Arena.

“We had a couple chances there, but overall we came out of the gates a little flat tonight. We’ll go home, have a week of practice, and be back at it next weekend.”

Roadrunners forward Tyson Empey on Tucson’s effort to erase an early deficit against the Colorado Eagles in Saturday’s series finale at the Budweiser Events Center.

CAM JOINS THE CLUB – Tucson forward Cameron Hebig tallied his tenth assist of the year in the second period of Saturday’s series finale with the Colorado Eagles. With the assist, Hebig became the fourth Roadrunner this season to reach double-digit goals and assists, joining Matias Macelli, Mike Carcone and Jan Jenik. The 25-year-old is one goal away from matching his career-high with 11 in a season, which he set back in the 2018-2019 season as a member of the Bakersfield Condors.

Watch Tucson forward Tyson Empey get the Roadrunners on the board in the second period of Saturday’s matchup against the Colorado Eagles. The goal marked Empey’s second of the season, with both coming in the final game of a six-game road trip. The 26-year-old scored his first American Hockey League on January 23 against the Ontario Reign, the final game of Tucson’s previous six-game road trip.

Tucson Roadrunners forward Stephen Baylis made his fourth appearance of the season Saturday night on the road against the Colorado Eagles after rejoining the Tucson roster for the series opener the previous night. The 27-year-old was one of two skaters to record an even plus-minus in a game that saw all nine goals scored while five-on-five. Baylis has 36 points in 39 games with the Rapid City Rush this season and leads the Rush in goals with 19.

Tucson Roadrunners Road Ahead: Home With Henderson
Scroll to top