Over 5,000 fans brought a record number of stuffed bears for the Roadrunners fourth annual Teddy Bear Toss Saturday night and were rewarded with a historic victory by the AHL’s best.

Forward and fourth-year Roadrunner Michael Bunting didn’t make the crowd wait long, just 9:06 to be exact before beating Cal Petersen of Ontario low to the blocker side and instigating a pouring of stuffed items onto the Tucson Arena ice.

The goal was just the start of two consecutive periods with three goals for Tucson, as Jeremy Gregoire and Andy Miele followed Bunting before the end of the first period, giving Tucson the lead by a trio at the end of 20.

Miele continued the team’s onslaught of scoring to start the second period with his second of the night, then Hudson Fasching and Jon Martin both struck on the power play to give the Roadrunners a lead of 6-0 through two periods.

Perhaps the best story of the evening was the home team’s netminder though, as Ivan Prosvetov went a perfect 27/27 for his first American Hockey League shutout.

Winning by eight for the first time in team history, tonight’s rout also extended the team’s longest winning streak ever to eight games.  In addition, the win marked eight straight wins on home ice and bolstered their already league-best win percentage to .821.

“Teddy Bear Toss, when you see it on the schedule, for me it’s, let’s just make sure we score at least one tonight.  Bunts did that, then we just kind of took it from there.”

Head Coach Jay Varady giving a chuckle post-game while sharing his honesty in regards to tonight’s special evening. Needless to say the group scored once, and then some, Coach.

Starting back-to-back games on consecutive nights is a tall task for any professional goaltender. Not only did 20-year-old Ivan Prosvetov do that tonight, however, he made personal history doing so.

Now with ten games under his belt at the AHL level, Ivan leads the league with a 1.88 goals against average (GAA) and a .946 save percentage (SV%), while touting a 9-1 record.

It may not have been the prettiest goal of the eight, but you still have to see THE Teddy Bear Toss Goal.

An excellent feed from the captain allows Bunting to get enough on a fumbling puck and bring the bears. 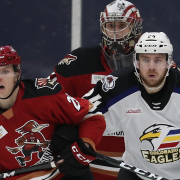