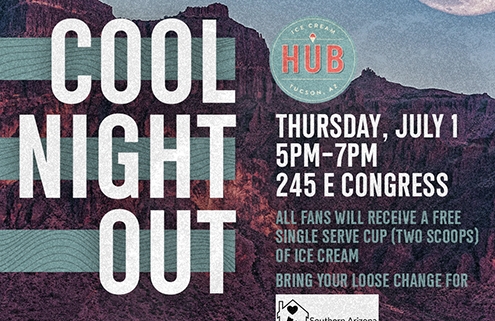 Tucson, Arizona – The Tucson Roadrunners, owned and operated by the Arizona Coyotes, and The Hub Ice Cream invite fans downtown for “A Cool Night Out” on Thursday, July 1 from 5 p.m. – 7 p.m.

Fans will receive a complementary single serve cup of handcrafted ice cream (two scoops). The Roadrunners and Hub Ice Cream are also asking fans to bring their loose change to be donated to the Southern Arizona Animal Food Bank. Cash and credit card donations will also be gladly accepted for donation.

Roadrunners Mascot Dusty will be present from 5:15 p.m. – 5:45 p.m. to entertain and Roadrunners Season Ticket Members who have renewed for the 21-22 season will be entered into a drawing to win a Roadrunners game worn jersey from the 2021 season.

For over 10 years, Hub Ice Cream has been making ice cream that brings people together in downtown Tucson. Our ice cream, which is served deliciously in a dreamy and sparkling space with vaulted ceilings and chandeliers, is created onsite, with natural ingredients, and with our own pasteurizer which helps us make the ice cream even more creamy and decadent. We make ice cream that’s local, homemade, and created with LOVE, bringing friends and family together and making spoonfuls of memories.

The Southern Arizona Animal Food Bank is a local non-profit organization driven by a single goal; to make sure no one ever has to make the choice between feeding themselves or feeding their animals.  As a non-profit, they collect and distribute free pet food to low income, unemployed, elderly and otherwise disadvantaged residents of Southern Arizona. By providing pet food to those in need, they offer an alternative to surrendering – or worse, abandoning – an animal companion.