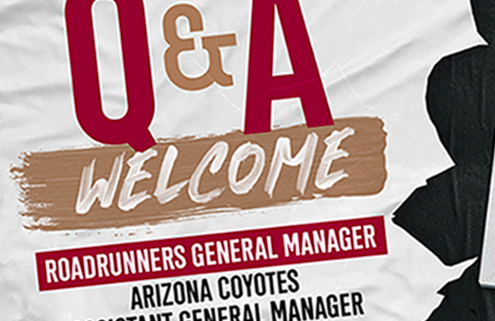 On Thursday, September 16 new Roadrunners General Manager and Coyotes Assistant General Manager John Ferguson met with the Tucson media for the first time after joining the organization the day before. TucsonRoadrunners.com’s Jimmy Peebles shares the answers to his questions right here!

Q: The Providence Bruins and Tucson Roadrunners have been two of the top AHL franchises for some time now. As the General Manager in Providence, what did you see that contributed to their success and how can that be brought to the Roadrunners that keeps Tucson up top?

A: It is hard to compare one organization to another, but the American Hockey League in and of itself and the development process really doesn’t change from team to team across the league. There are ways to do it better and there are ways to consistently not separate sole development from winning as well. Those two do not need to be mutually exclusive at the AHL level. In fact, one begets the other and enhances the other. We don’t apologize for creating, setting, and expecting high standards for our athletes and our players. They know we support everything they do as long as they meet us more than halfway in everything we ask, and we’ll all get along really well, and our players will get better, and we’ll start developing NHL players in a competitively successful environment.

Q: You’ve been in front offices for over twenty years now… what has evolved at the AHL level with both player development and performance?

A: It’s interesting, there’s a greater attention to detail and much more resources, both human and financial being invested in the development of our athletes. It is a part of the game today where off the ice, teams are investing more resources in skills development and support for the players well-being both on and off the ice. Nutrition, sports science, all those areas are also being invested in at greater rates at the American level, and for good reason. The work-rest-travel-play ratios are being determined for high output and efficiency of the players. Another challenge out west here is the travel. Travel is much greater than we would face typically with teams in the east, so that is a factor to control for.

Q: As we talk about the AHL, success isn’t always necessarily represented by wins and losses. But your previous organizations were consistently at the top of the league. Where do you rank winning as a part of player development?

A: It’s such a big part of development, there’s no questioning it. Teams that do well can also develop players and it’s about the right environment, the winning environment externally and internally. The competition is a great lesson for the young players and when they learn how to compete against their opponents as well as competing in practice. When they push each other for ice time and roles on the team, it all leads to the right results. Jay Varady and the coaches are going to deploy their assets as they see fit, understanding there is as much an eye on player development as there is on winning. Both of those matter and they matter a great deal, because professional hockey players need to learn how to win and compete and learn how to be a part of a winning team.

Q: Looking at the organization, do you have any familiarities or past experiences with any of our current staff or players?

A: Not any from the current staff, but I certainly respect their performances from afar. Our paths haven’t crossed but I know [Associate Head Coach] Steve Potvin a little bit through mutual friends but not personally. [Head Coach] Jay Varady and I had some time the other day to meet and chat a little bit, and that relationship will grow. The hockey world is small, and I’ve been around a while, so we certainly know people who are mutual friends and acquaintances that’s for sure.

Q: The Coyotes organization is filled with promising young talent, in your first 24 hours as Assistant GM, what do you see out of our system?

A: It’s a really good group, a burgeoning group that’s certainly growing. The key for any NHL club is to compile as many top assets and good players once you’re trying to compete to win at the NHL level, and it’s no different at the American Hockey League level. We’ve been in the process of adding top assets while growing and developing those that are already in place, and this group is well positioned for growth. That said, it’s a very competitive division and every point will need to be earned.

Q: Just like Boston and Providence, or Toronto and Toronto, our NHL and AHL squads are just a short drive away from each other. How much of a benefit is having those teams in close proximity to each other?

A: It is a great benefit, you can call up players on the day of a game, and they can be there without having to get on a plane and travel long distances with time changes. You know you’re not going to run into issues there, so it really is big to have the players available. It’s even better for the players, they are not losing training days traveling, and they’re not showing up tired. There are great benefits from having the teams close and it affords and opportunity for management and development staff to really look at both teams regularly and keep tabs. I think it means a lot to the players in the American Hockey League and everyone working around the team. They feel like they matter and their development matters. And the management team is close enough to be popping in and observing and monitoring their progress.

Q: This question gets asked to everybody that comes to our organization, so I must ask you, are you excited to have sun and warm temperatures going in and out of the rink, especially coming from the Northeast, and Canada before that?

A:  Absolutely, I enjoy the weather and scenery here. It’s a beautiful part of the country and I’m very happy to be here.