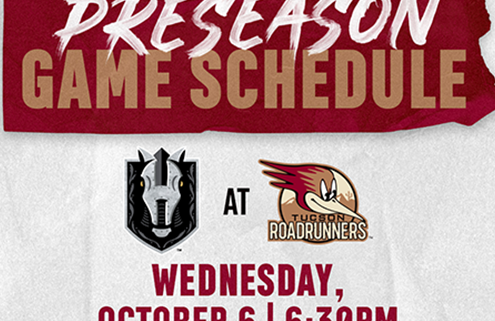 Tucson, Arizona – The Tucson Roadrunners, owned and operated by the Arizona Coyotes, will open the preseason Wednesday, October 6 at Tucson Arena with a 6:30 p.m. face-off against the Henderson Silver Knights, the AHL affiliate of the Vegas Golden Knights.

For more information on tickets for the preseason contest, visit TucsonRoadrunners.com/Preseason. All Roadrunners Season Ticket Members and Ticket Package Holders will receive complimentary tickets to the game through their dedicated Account Representative.

The three-game preseason schedule will conclude with two games at Orleans Arena in Las Vegas on Sunday, October 10 and Monday, October 11 for 7 p.m. face-offs.

The Roadrunners open the 2021-2022 regular season Friday, October 15 in Stockton with the Home Opening Weekend Saturday, October 23 at 7 p.m. and Sunday, October 24 at 4 p.m. against Texas.

The complete 2021-2022 schedule can be downloaded to Outlook, Google, Apple and other devices by clicking HERE.

Season Tickets; Flex Packages and Half Season Packages, where fans pick 18 games are on sale now at Roadrunners Ticket Sales Central at TucsonRoadrunners.com/Central. In addition, information on Group Parties, On-Ice Suites and Dusty’s Kids Club can be found there as well.

Followon TwitterSubscribeto RSS Feed
Summer Blog: Most Games, Texting With #4, Where On The Road