One day its textbooks, the next, it’s Training Camp.

As of Friday, Kevin Hancock was being your typical college student, completing a pair of assignments. Both that were due the next day, of course.

“I was in the library, my phone rang and it was my agent,” the newest Roadrunners forward said with a laugh out of retrospect. “I was so thrilled. I couldn’t have been more excited to get the news and to sign.”

Attending Brock University in St. Catharines, Ontario after a successful four-year major junior hockey career, the 5-foot-11, 181-pound forward had been awaiting the right opportunity to make the jump to pro hockey. Despite already playing in preseason action with his collegiate club just over ten days ago and attempting to readjust to the nature of academia, the native of Mississauga felt his best chance at success came in the desert.

“The opportunity to come here, prove myself as a player and get that chance in the pro ranks is obviously exciting,” Hancock said of the offer, a one-year AHL contract that was officially announced over the weekend. “My goal is to hopefully have a long career in pro hockey, so I figured I would give this a shot and do my best to enjoy it.”

Elated and providing a presence outwardly displaying his happiness of the newfound situation, the contract has been a long-time coming for the young man that accrued a total of 291 points in 266 games in the Ontario Hockey League (OHL).

“It’s been a lot of travel and they’ve all been great learning experiences,” the former Owen Sound Attack (OHL) star remarked, grateful of his past. “They’ve all been different types of organizations and learning how they do everything, as well as how I matched up against some of their top prospects was very nice.”

Although Hancock’s rights had remained up for grabs for longer than he’d hoped, it worked out for the left-handed winger and he’s pleased with it.

“It feels awesome to now officially be considered a pro hockey player,” he continued. “This is one step in my journey and I hope to make it up to the big league one day. I know I’m fortunate.”

Should he produce as a Roadrunner the way he did over the course of the last four years, the NHL may not be farfetched.

Admittedly though, Hancock’s venture to school has him a bit behind the eight ball here at Training Camp in Scottsdale.

“It’s been a great few days but being just thrown in, a lot of guys have had the experience of Coyotes Development Camp and Main Camp, so they’ve got the systems down,” Tucson’s new #11 said. “For me, it’s learning the what I need to as quickly as possible and trying to fit in.”

While the fitting in and learning of the systems may take some time for Hancock, perhaps the part he’ll enjoy the most is that there’s no physical homework that needs to be submitted tomorrow. 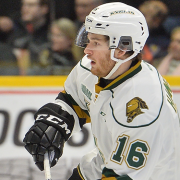