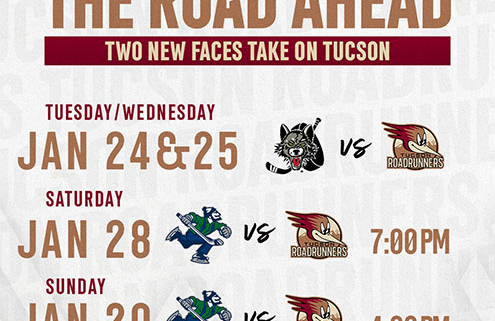 The Roadrunners continue their home stand this week with four games in six days at the Tucson Arena, beginning on Tuesday, January 24 with the first of two matchups against the Chicago Wolves. The reigning Calder Cup Champions and AHL affiliate of the Carolina Hurricanes are taking their first trip to Tucson since October 30, 2019. The Roadrunners carry a two-game winning streak against the Wolves into the series after back-to-back victories in Chicago on March 5 and 7 of 2020. Following the midweek set with the Wolves, Tucson will close out the six-game home stand with a pair of weekend contests against the Abbotsford Canucks starting on Saturday, January 28.

The fun at the Tucson Arena continues with the Roadrunners next four games on their home ice. The midweek set against the Chicago Wolves marks the next $2 Twos-Day and Kids Free Wednesday of the season on January 24 and 25. Tucson will then welcome the Abbotsford Canucks to town with the fan-favorite Star Wars Night on Saturday, January 28, followed by Arizona Coyotes Day the next day. Sunday’s series finale with Abbotsford will feature Arizona Coyotes Mascot Howler alongside Roadrunners Mascot Dusty. For the full promotions schedule and to purchase tickets, visit TucsonRoadrunners.com/Fun.

Awesome Arena Atmosphere Over The Weekend

The six-game home stand for the Roadrunners kicked off with a two-game set against the Bakersfield Condors. Tucson took the series opener on Friday with a decisive 6-2 win fueled by a pair of three-goal periods and five multiple-point performances by Roadrunners skaters. The team also unveiled their newest El Lazo alternate jerseys as part of the first El Lazo de Tucson Night of the season. The series finale with Bakersfield on Saturday was the Roadrunners first Harry Potter Night since the 2019-2020 season. Over 4,500 fans, many dressed in Harry Potter themed gear, spent their evening at the Tucson Arena cheering on the Roadrunners. The series finale marked the Condors last trip to Tucson on the year, but the Roadrunners will don their El Lazo identity two more times this season: Friday, March 3 and Friday, April 14.

Dauphin And Dea In A Friendly Duel

Linemates Laurent Dauphin and J.S. Dea were in a battle over the weekend for first place in total scoring on the active Roadrunners roster, as the pair of forwards entered the two-game set against Bakersfield even at 28 points apiece. Both players began the series with three-point performances on Friday to remain tied at 31. Dea extended his active scoring streak in the series finale to three games with an assist, while Dauphin narrowly took the scoring lead with a goal and an assist. Dauphin’s two-point performance on Saturday set a Roadrunners season high for points against a single opponent, as the 27-year-old has 11 total points (6g 5a) across five matchups with the Bakersfield Condors.

Smith Steps It Up

First-year Roadrunners forward Nathan Smith had a strong weekend against the Bakersfield Condors, as the 24-year-old recorded his first back-to-back outings with multiple points on the season. Smith was the only Tucson skater to net multiple goals in their 6-2 win over the Condors in the series opener, and he followed that up with a goal and an assist the next night. Smith’s tally on Saturday made him the fifth player to score double-digit goals for the Roadrunners this season, and his 19 total points (10g 9a) rank sixth on the active Tucson roster.

Parks Puts On A Show

Friday’s series opener against the Bakersfield Condors marked the Roadrunners season debut of goaltender Tyler Parks, after he was recalled from the ECHL’s Atlanta Gladiators that morning. The 30-year-old was back between the pipes for Tucson for the first time since the 2019-2020 campaign when he appeared in five total games from January 10 to February 15. Parks stopped 23 of 25 shots faced in the Roadrunners 6-2 win over the Condors, improving his all-time record with Tucson to 3-1-1. In addition, his .920 save percentage on Friday was identical to his save percentage in over 247 minutes of action with the Roadrunners in 2019-2020.

The action-packed weekend between the Roadrunners and Bakersfield Condors featured a fight between Tucson’s Curtis Douglas and Bakersfield’s Philip Kemp in the second period of Saturday’s series finale. The bout marked the six-foot-nine forward’s third time dropping the gloves in the month of January, and fourth time since Douglas joined the Roadrunners in November when he was acquired by the Coyotes from the Toronto Maple Leafs and assigned to Tucson. The 22-year-old is second on the team in total fights this year, trailing only Travis Barron and his six total bouts.

Tucson’s penalty-kill unit has gone a perfect 11-for-11 over their last five games, which represents a Roadrunners season-high for consecutive contests without allowing a power-play goal. The Roadrunners outdrew the Bakersfield Condors in trips to the man-advantage over their latest two-game set by a count of six to four, as they did not go shorthanded for the entire series finale against them on Saturday. Tucson added to their strong special-teams performance on the weekend with a first-period power-play score by Laurent Dauphin on Saturday, his seventh of the season.

With over half of the Roadrunners regular-season schedule in the books, four Tucson skaters have suited up for all 39 games so far. Forwards J.S. Dea, Nathan Smith and Milos Kelemen are all on track for perfect attendance in 2022-2023, along with defensemen Vlad Kolyachonok in his second year with Tucson. The Roadrunners finished the 2021-2022 campaign with two players that took the ice for all 68 contests: forward Cam Hebig and defenseman Cam Crotty.

Tucson Roadrunners Happy Hour airs every Tuesday at 5 p.m. on FOX Sports 1450AM and the iHeartRadio app, with a podcast version also available after each episode on the iHeartRadio app. This week, co-hosts Adrian Denny, Brett Fera and Kim Cota-Robles will be joined by a member of the Roadrunners in a special pregame edition of Happy Hour before Tucson hosts the Chicago Wolves. In addition, a new episode of the Tucson Roadrunners Insider Podcast released on Sunday, as “Voice of the Roadrunners” Adrian Denny and TucsonRoadrunners.com’s Jimmy Peebles heard from forward J.S. Dea, goaltender Ivan Prosvetov and Head Coach Steve Potvin as they looked back on the opening weekend of the home stand. The podcast can be found on the iHeartRadio App.