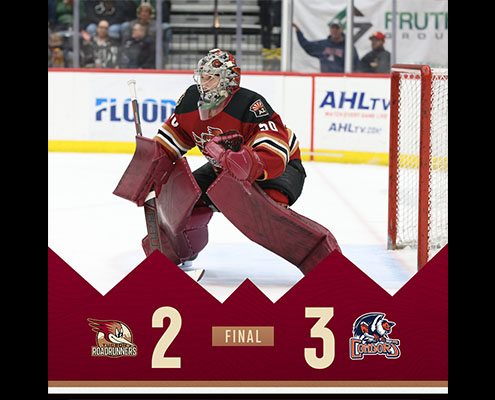 Tucson, Arizona – The Tucson Roadrunners split the weekend series against the Bakersfield Condors at the Tucson Arena, as they fell by a score of 3-2 on Saturday. Tucson linemates Laurent Dauphin and Nathan Smith recorded their second-straight multiple-point performances with a goal and an assist apiece, while goaltender Ivan Prosvetov made 22 saves and denied a penalty shot attempt by the Condors. The Roadrunners will remain at home for four more contests at the Tucson Arena, beginning on Tuesday when they host the Reigning Calder Cup Champion Chicago Wolves.

Forward Nathan Smith became the fifth Roadrunners player to reach ten goals on the season with his second-period tally on Saturday against the Bakersfield Condors. Smith notched back-to-back two-point performances over the weekend for Tucson, as he finished the two-game set against Bakersfield with three goals and an assist. The 24-year-old joined forwards Mike Carcone, J.S. Dea, Laurent Dauphin and Adam Cracknell as Roadrunners skaters with double-digit goals on the season.

THE BOX IS CLOSED – The Roadrunners won the special-teams battle over the weekend against the Bakersfield, as they took all three trips to the man-advantage in Saturday’s series finale. Forward Laurent Dauphin’s first-period score on Saturday marked the only special-team goal of the series, as Tucson went a perfect four-for-four on the penalty-kill against the Condors in the series opener. Saturday’s contest marked the first time this season where the Roadrunners did not go shorthanded, with their only time in the penalty-box stemming from coincidental minors in the first period and a fight by Curtis Douglas in the middle frame.

Tucson’s forward line of Laurent Dauphin, Nathan Smith, and J.S. Dea accounted for 13 of the 23 total points recorded overall against the Condors on the weekend, including each of the Roadrunners two goals on Saturday. Dauphin (1g 4a) led the way with back-to-back multi-point outings, while Smith (3g 1a) notched consecutive two-point performances as well. Dea (1g 3a) followed up his three-point night in the series opener with an assist on Dauphin’s first-period goal on Saturday.

“I know that [Seth Griffith] is a good shooter. We just beat Bakersfield in a shootout in their building on Saturday, and he was their last skater that I stopped. He made a good shot, but I made a better save.”

Roadrunners goaltender Ivan Prosvetov on his big save against Bakersfield’s Seth Griffith on a penalty shot. The Condors had an opportunity to take a 2-0 lead in the first 7:20 of the contest with the shot, but Prosvetov denied the chance to keep it a one-goal game.

After the Roadrunners opened the scoring in each of the three previous meetings with the Condors at the Tucson Arena this year, Bakersfield took a 1-0 lead Saturday night with 1:56 gone by in the first period. The Condors had a chance to extend their early lead 7:20 into the frame with a penalty shot, but Roadrunners backstop Ivan Prosvetov denied forward Seth Griffith to keep it a one-goal game. Tucson applied pressure on the Condors following their early goal, which resulted in the Roadrunners taking both trips to the man-advantage in the frame. Laurent Dauphin was able to capitalize on their second power-play opportunity and even the score at 1-1 with 4:04 remaining in the period, as he lit the lamp for his 14th goal on the season and team-leading sixth of the year against the Condors. The score remained knotted at 1-1 through the opening 13:36 of the second period, before Nathan Smith gave Tucson their first lead of the night at 2-1 with his tenth goal of the season. Smith took a pass from defenseman Cam Dineen and rifled the puck from in front of the Bakersfield net, which resulted in his third goal and fourth total point over the weekend against the Condors. Not long after the Roadrunners took a one-goal lead, Tucson’s Curtis Douglas dropped the gloves with Bakersfield’s Philip Kemp for the forward’s third fight in the month of January and fourth since joining the team in November. Smith’s even-strength score represented the only offense of the second period, as the Roadrunners entered the final 20 minutes of play holding onto their 2-1 lead. Trailing by one, the Condors refused to go away in the third period, with a goal 5:40 into the frame to even the score back up at 2-2. Bakersfield took the shift in momentum and scored their second-straight goal of the frame to retake the lead at 3-2 with 8:36 remaining in regulation.  The Roadrunners took their third power-play of the contest with under five minutes to play and pulled goaltender Ivan Prosvetov with 1:38 left on the clock in an attempt to tie the game late. The Condors and netminder Calvin Pickard fended off Tucson’s late attacks to finish the night with 35 saves and a final score of 3-2 in their favor of Bakersfield.