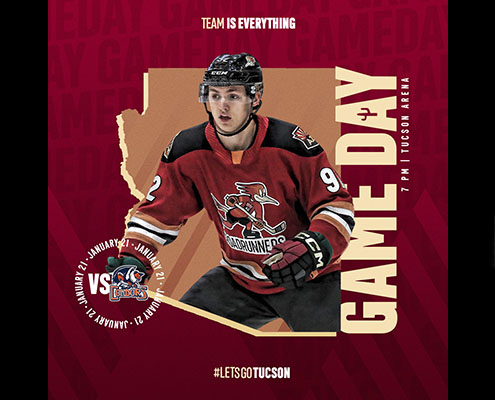 The Roadrunners will take on the Bakersfield Condors from the Tucson Arena Saturday night to wrap up the two-game weekend set. Saturday’s series finale marks the fourth and final time the Roadrunners will play host to the AHL affiliate of the Edmonton Oilers this season, with three more matchups slated to take place at the Mechanics Bank Arena in Bakersfield. Following their rematch against the Condors on Saturday, Tucson will remain on their home ice for the next four contests beginning on Tuesday with the first meeting of the year against the reigning Calder Cup Champion Chicago Wolves.

Three Things
1) The Roadrunners took the series opener on Friday by a score of 6-2, fueled by a pair of three-goal periods. Tucson tallied their first three goals in the opening 6:13 of the contest to jump out to a 3-0 lead, then shut the door in the third period with another trio of goals to secure their third-straight multi-goal win against Bakersfield at the Tucson Arena. The Roadrunners have outscored the Condors 20 to 11 across their four previous matchups this season, all while never allowing more than three goals and never scoring less than four goals themselves. Tucson’s active four-game winning streak over Bakersfield marks their most consecutive wins against a single opponent on the year.

2) Tucson’s 6-2 win over the Condors on Friday was highlighted by three-point performances by linemates J.S. Dea (1g 2a) and Laurent Dauphin (3a). The pair remain tied for the active team lead in scoring with 31 points apiece, as Dea’s 15 goals and Dauphin’s 18 assists also lead all active Roadrunners forwards entering Saturday. Dauphin’s trio of assists on Friday gave the 27-year-old his third three-point outing of the year and second against Bakersfield, after he recorded a hat trick against the Condors on October 23. Meanwhile, Dea has lit the lamp in each of his last two outings and has tallied at least a point in all three outings against the Condors on home ice.

3) With a victory over the Condors on Saturday, the Roadrunners can secure a winning record in the eight-game season series against Bakersfield. Tucson has taken each of the first four meetings with the Condors on the year, including three multi-goal wins on their home ice. The Roadrunners have made a habit of scoring quickly on Bakersfield when at the Tucson Arena, with six first-period goals compared to two by the Condors. The trend continued Friday night when forward Nathan Smith lit the lamp 1:15 into the contest for the first of Tucson’s three first-period goals in the win. In their first meeting of the season on October 22, Roadrunners Captain Adam Cracknell opened the scoring 57 seconds into the game before an eventual 5-3 Tucson victory.

“It’s been going well, we have a good team [in Atlanta] too. I think I’ve been playing really well, I just try to make sure I play hard every night and give my team a chance to win.”

Roadrunners goaltender Tyler Parks on his 2022-2023 season to date. The 30-year-old made his season debut for Tucson on Friday after being recalled from the ECHL’s Atlanta Gladiators and stopped 23 of 25 shots faced in the win.

Number to Know
8 – All eight of the goals in Friday’s series opener between the Roadrunners and Condors were scored while skating five-on-five, which set a season-high for the most combined goals in a game without a power-play score by Tucson or their opponent. The Roadrunners went a perfect four-for-four on the penalty-kill with only three trips to the man-advantage of their own. After the Condors drew all three power-play opportunities in the opening frame, the Roadrunners only experienced 1:35 of playing down a skater for the rest of the night.

We’re Doing It Live
Tonight’s game will be broadcast live on AHLtv, as well as on the radio at FOX Sports 1450AM and the iHeartRadio app. Coverage begins at 6:45 with Roadrunners Warm-Up hosted by Jimmy Peebles, before “Voice of the Roadrunners” Adrian Denny has all the action from Tucson Arena.