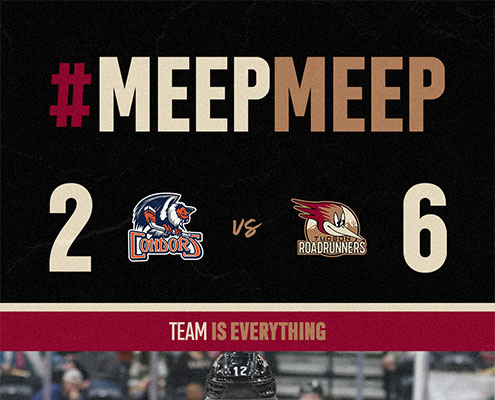 Tucson, Arizona – The Tucson Roadrunners led for 58:45 of regulation on Friday as they defeated the Bakersfield Condors by a count of 6-2 at the Tucson Arena. Five different Roadrunners skaters recorded multiple-point performances, while netminder Tyler Parks stopped 23 of 25 shots faced in his season debut with Tucson. Friday’s series opener represented the first El Lazo de Tucson night of the 2022-2023 campaign, as the Roadrunners debuted new El Lazo alternate jerseys and Mascot Dusty donned his alter-ego of “El Polvo” for the contest. Tucson and Bakersfield will wrap up the two-game series Saturday night from the Old Pueblo with their fifth of eight total meetings on the season.

Goaltender Tyler Parks made his season debut for the Roadrunners on Friday after being recalled from the ECHL’s Atlanta Gladiators. The 30-year-old stopped 23 of 25 shots faced in Tucson’s 6-2 win over Bakersfield, including a perfect third period. The start marked his sixth career outing with the Roadrunners and the first since February of 2020. Parks has a 13-6-1 record with a shutout in 21 appearances with Atlanta this season and arrived in Tucson with the third-best save percentage in the ECHL at .926.

PLENTY OF POINTS – Tucson’s scoring came in bunches on Friday against the Bakersfield Condors, with a pair of three-goal periods and five Roadrunners skaters notching multiple points. Linemates J.S. Dea (1g 2a) and Laurent Dauphin (3a) led the way with three-point nights, as Dauphin recorded his second three-point performance of the season against the Condors. Nathan Smith (2g) was the only Tucson skater to light the lamp twice on the night, while Boko Imama (1g 1a) and Travis Barron (2a) rounded out the list of Roadrunners with multiple points in the win.

Friday’s series opener with the Bakersfield Condors marked the Roadrunners first El Lazo De Tucson night of the 2022-2023 season. The team debuted new El Lazo alternate jerseys and the original El Lazo logo returned as the Roadrunners celebrated the rich culture and heritage of Southern Arizona. Prior to the game, Mascot Dusty hosted a special ROADRUNNERS HOCKEY Rules presentation, encouraging new hockey fans to have fun and cheer on the team at the Tucson Arena.

“If we can replicate that game minus the second period, we’d be happy every night. I’m ecstatic to see that the boys pulled it off, [Bakersfield] didn’t make it easy on us. We came out to a good start, they climbed back into it, but I’m happy with the results. No matter what the scenario or what the circumstances are, it’s always tough to win. We have to appreciate them.”

Roadrunners Head Coach Steve Potvin on Tucson’s 6-2 victory over the Bakersfield Condors Friday for their fourth consecutive win against the Condors to start the season series.

The Roadrunners applied early pressure in Friday’s opening frame, which led to a 1-0 lead off the stick of Nathan Smith. Smith took a rebound from Condors backstop Calvin Pickard and backhanded the puck for his eighth goal of the season with just 1:15 gone by in the contest. With the assists on the early goal, Laurent Dauphin and J.S. Dea remained in a tie for first place on the active Roadrunners roster in scoring at 29 points apiece, as the AHL’s leading scorer Mike Carcone was recalled by the Arizona Coyotes Thursday. Tucson’s offense continued to work in the early goings of the first period with Ryan McGregor’s second goal in as many games, doubling the lead to 2-0 4:14 into the frame. The goal came just minutes after a near Roadrunners score was waved off, as McGregor sent a loose puck to the back of the net. J.S. Dea joined McGregor with his second-straight outing lighting the lamp less than two minutes later, pushing Tucson’s advantage to 3-0 in the opening half of the first period. Dea took sole possession of the active team lead in goals with his 15th tally of the season, while he and Dauphin remained tied for first in total scoring at 30 points each. Bakersfield got on the board with 3:58 remaining in the opening frame, as they cut Tucson’s advantage to 3-1 going into the second period of play. The Condors opened the second-period scoring 6:39 into the frame with the fifth consecutive five-on-five tally to begin the contest, as they made it a one-goal game with Tucson still leading 3-2. The goal by Bakersfield marked the only offense of the middle frame, as Roadrunners netminder Tyler Parks stopped eight of nine in the period for 20 total saves through the first 40 minutes of play. In his season debut for Tucson, Parks and the Roadrunners entered the final frame with a one-goal lead at 3-2. After a brief delay to replace a pane of glass knocked loose by a Curtis Douglas check, Boko Imama brought the action back with a big insurance goal for the Roadrunners. Imama fired in a shot from deep for his second time lighting the lamp this season and a 4-2 Tucson lead 5:27 into the third period. The Roadrunners offense kept rolling late in the frame with a pair of insurance goals 1:02 apart by Nathan Smith and Hudson Elynuik to close out the tape-to-tape victory with a final score of 6-2. Smith’s late tally made him the only Tucson skater to find the back of the net twice in the contest, while J.S. Dea (1g 2a), Boko Imama (1g 1a), Travis Barron (2a) and Laurent Dauphin (3a) joined Smith with multiple-point performances as well. The Roadrunners and Condors will meet for the series finale from the Tucson Arena Saturday night, with a chance for the Roadrunners to secure the season series over Bakersfield with a win.