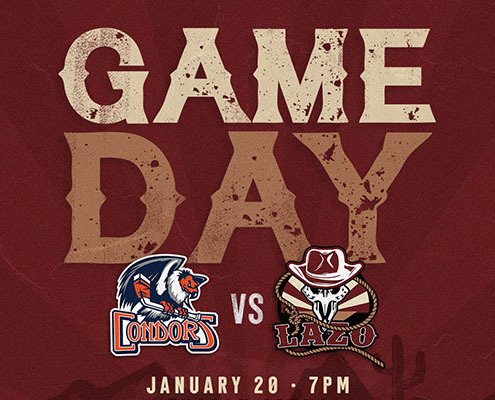 The Roadrunners return from the road to open a six-game home stand at the Tucson Arena beginning Friday, January 20, against the Bakersfield Condors. Tucson is facing off with the AHL affiliate of the Edmonton Oilers for the fourth time this season, after they last met less than a week ago on Saturday, January 14, a 4-3 Roadrunners shootout win. Friday’s series opener represents the first El Lazo de Tucson Night of the season, with the Roadrunners debuting new El Lazo alternate jerseys and Mascot Dusty appearing as “El Polvo” for the game. In addition, the Roadrunners will be hosting a pregame Hockey 101 Session of Roadrunners Rules for fans that are new to the game of hockey. For more information on El Lazo and the all-new Dusty’s Cheering Section, click HERE.

Three Things
1) The Roadrunners are undefeated against Bakersfield through three matchups this season, outscoring the Condors 14-9 across the trio of wins. Their first two meetings took place at the Tucson Arena as part of the Roadrunners opening weekend on October 22 and 23, with Tucson earning back-to-back 5-3 wins. Their latest tilt came on January 14, when the Roadrunners overcame first-period deficits of 2-0 and 3-1 to earn a 4-3 shootout victory at the Mechanics Bank Arena in Bakersfield. Tucson’s three-game win streak over the Condors is tied with identical streaks against the San Jose Barracuda and San Diego for the most consecutive wins against an opponent to begin this season.

2) Tucson forward Laurent Dauphin leads the team in scoring against the Condors this season, with six points (5g 1a) over the three meetings with Bakersfield. This includes Dauphin’s hat trick the last time the Condors were in Tucson on Saturday, October 23. His five goals scored are the second-most by a Roadrunners skater against a single opponent on the year, trailing only Mike Carcone and his seven goals against the Coachella Valley Firebirds in as many contests. Dauphin also scored the third-period equalizer on January 14 against the Condors to send the contest to overtime before an eventual shootout win for Tucson. The 27-year-old is tied with forward J.S. Dea for first place on the active Roadrunners roster in total points with 28 (13g 15a) in 33 appearances.

3) The Arizona Coyotes and the Tucson Roadrunners announced a pair of roster moves prior to Tucson’s series opener with the Bakersfield Condors on Friday. On Thursday, The Coyotes recalled Roadrunners forward and the AHL’s leading scorer Mike Carcone for the second time this season. Carcone previously scored a pair of goals and was a plus-three in six games with Arizona from December 27 to January 6. The 26-year-old was selected as Tucson’s representative for the 2023 AHL All-Star Classic in Laval and is currently on a Roadrunners franchise-record ten-game scoring streak dating back to before his first NHL call-up of the season. In addition, Tucson has added goaltender Tyler Parks from the ECHL’s Atlanta Gladiators. Parks previously appeared in net for five games with the Roadrunners during the 2019-2020 campaign and has recorded a 13-6-1 record with a shutout in 21 outings for Atlanta this season. The 30-year-old is currently tied for third in the ECHL with a .926 save percentage.

“Try and get as close to the ice as possible, so you can really see the speed the game is played at. How quick it is, how hard some of the hits are, and you can get a good view of our team. Try and interact with Dusty, he’s a pretty crazy bird and always interacts with the fans. Most of all, try to enjoy yourself and have some fun.”

Roadrunners forward Ryan McGregor on what he would tell a first-time hockey fan, as Tucson is hosting a pregame Hockey 101 Session of Roadrunners Rules as part of their first El Lazo de Tucson Night of the season.

Number to Know
6 – The number of games on the Roadrunners current home stand at the Tucson Arena, beginning with Friday’s series opener against the Condors. The six-game slate over the span of ten days is tied for the most consecutive home games on the schedule for Tucson this season, after the Roadrunners had an identical stretch from November 11 to 20. Following the final game of the home stand on January 29 against the Abbotsford Canucks, Tucson will embark on their longest road trip of the season with seven games away from the Old Pueblo starting January 31 back in Bakersfield.

We’re Doing It Live
Tonight’s game will be broadcast live on AHLtv, as well as on the radio at FOX Sports 1450AM and the iHeartRadio app. Coverage begins at 6:45 with Roadrunners Warm-Up hosted by Jimmy Peebles, before “Voice of the Roadrunners” Adrian Denny has all the action from Tucson Arena.