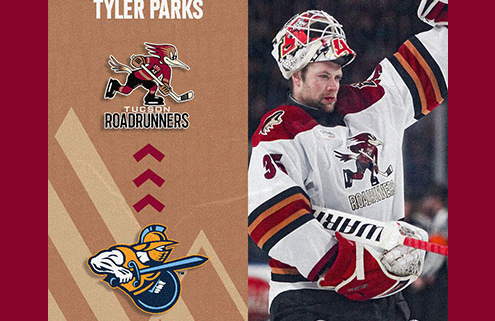 Tucson, Arizona – The Tucson Roadrunners and General Manager John Ferguson announced Friday that goaltender Tyler Parks had been recalled from the ECHL’s Atlanta Gladiators ahead of Tucson’s series opener against the Bakersfield Condors.

In 21 appearances with Atlanta this season, Parks has a record of 13-6-1 with a 30-save shutout on January 8. He is currently tied for third in the ECHL with a .926 save percentage and is among the top-nine in the league for wins (13) and goals against average (2.48) on the year. The Gladiators are tied with the Florida Everblades for first in the ECHL’s South Division with a 22-13-3-0 record.

The 30-year-old previously appeared in five games for the Roadrunners during the 2019-2020 campaign, including his American Hockey League debut on January 10, 2020. In his time with Tucson, he recorded a goals against average (GAA) of 2.18 and a .920 save percentage across nearly 250 minutes of action.

Parks was between the pipes for 23 games with the Atlanta Gladiators in 2021-2022 and finished the year with a 16-4-2 record, two shutouts, a 2.14 GAA and an ECHL career-high .931 save percentage. He has earned a winning record in each of his last three ECHL seasons, for a 41-18-7 overall mark during that span.

The Roadrunners open a six-game home stand at the Tucson Arena Friday night against the Bakersfield Condors, the AHL affiliate of the Edmonton Oilers.