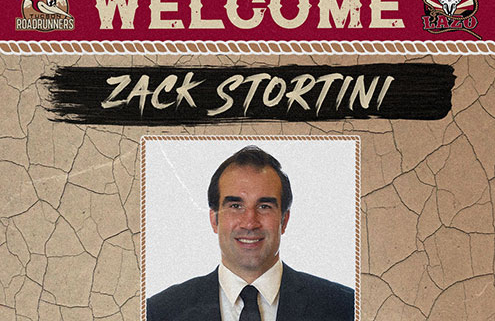 “Zack’s extensive professional playing experience as a team-first competitor combined with his rise on the coaching side make him the ideal complement to John Slaney in supporting and executing Steve Potvin’s head coaching strategies while developing each player’s individual skills and capabilities.”

Stortini, 36, comes to Tucson from the Ontario Hockey League’s Sudbury Wolves where he served as associate coach. He transitioned to coaching as an assistant coach with Sudbury in 2019-2020 after a 14-year professional career that included 860 professional games; with 257 in the NHL with Edmonton and Nashville and 603 in the AHL. He retired as a player in 2019, after winning his second career Calder Cup Championship in his third trip to the finals, as a member of the AHL’s Charlotte Checkers.

“I am looking forward to coaching with Zack.  He’s a great fit for our staff. Zack is talented, respected and well liked in our small hockey community. He’ll be an asset to our organization.”

The Ontario native was originally drafted by the Edmonton Oilers in the 2003 and also won a Calder Cup in 2007 with the Hamilton Bulldogs. He led the American Hockey League in penalty minutes with 299 during the 2013-2014 season with Norfolk. Since 2003, he is second in the AHL in penalty minutes with 1,825 and ranks 16th overall in AHL history in penalty minutes. He served as captain of the Binghamton Senators in 2015-2016 and was also a three-time nominee for the Yanick Dupre AHL Man of the Year Award for his contributions to his local community and charitable organizations.

“I am thrilled to be returning to the pro game after learning so much about coaching in the OHL with Sudbury. I am excited and honored to have the opportunity to join Steve Potvin’s staff with the Tucson Roadrunners and to be a part of the Arizona Coyotes organization. I look forward to collaborating with the coaching staff, continuing the development of our prospects and I am eager to contribute to the winning culture that has been established in Tucson.”

Stortini appeared in four games against the Roadrunners during the 2016-2017 season with San Jose, including three games at Tucson Arena as he accumulated 19 total penalty minutes. Prior to turning pro, Stortini was a three-year captain for Sudbury.