Russo was originally drafted by the New York Islanders in the fourth round (95th overall) in the 2011 Entry Draft. 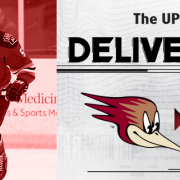