Giovanni Fiore
The 23-year-old recorded seven points in 30 games with Tucson after being acquired in December from the Anaheim Ducks organization.

Jeremy Gregoire
Another mid-season acquisition, Gregoire burst into the Roadrunners lineup with three goals in his first six games with the team after coming over from the Milwaukee Admirals. The 24-year-old was also re-signed to a two-year contract with Tucson in June.

Kelly Klima
Klima returns to Tucson for his second season after contributing at a point-per-game pace in the ECHL prior to his recall last season.

Nate Schnarr
Schnarr, a third-round selection of the Coyotes in 2017, finished ninth in Ontario Hockey League scoring last season with 102 points in 65 games.

Dane Birks
Acquired in the same trade that brought Phil Kessel to the organization, Birks will begin his second professional campaign in Roadrunners training camp.

Cam Dineen
At just 20-years-old, Cam Dineen’s first season slated him in the Roadrunners lineup for 57 games. He now returns to Southern Arizona once again.

Jalen Smereck
Smereck participated in the ECHL All-Star Game last season and has played in 20 games with Tucson since 2017.

Erik Kallgren
With back-to-back strong seasons in Sweden under his belt, Erik Kallgren comes to Roadrunners traning camp competing for a spot in the crease. 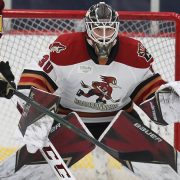