Sunday afternoon at SAP Center in San Jose the Roadrunners needed four goals in the third period to complete the come-from-behind victory over the Barracuda.

Friday night at Tucson Arena the Roadrunners needed just two, along with nine rounds of a shootout to pick up yet another comeback win, this time over the Stockton Heat.

Finding themselves trailing 2-0 early in the third period, Roadrunners forward Jon Martin received a gracious feed in front from defenseman Kyle Capobianco, who was playing in his second game in 24 hours, to cut the visitors lead in half.

Utilizing their most effective period in terms of shots on goal, Tucson got another past Jon Gillies with 6:15 remaining in the third period.  Capobianco, anchoring the Roadrunners power play just 24 hours after playing with the Coyotes in Glendale, swung a pass to his left where Brayden Burke glided into both time and space before depositing a shot upstairs to knot the game at 2-2.

Thanks to the play of Adin Hill, who was spectacular in the weekend opener, the two sides needed overtime and eventually a shootout to settle the potentially temporary first place alignment.

Trailing 1-0 in the bottom of the third round, team-leading goal scorer Lane Pedersonwas able to extend the conclusion to an elongated nine rounds by scoring and eventually Beau Bennett netted his first career AHL goal in the shootout to win it for Tucson.

In net Hill finished the night 26 of 28 in addition to his eight of nine in the shootout to match a franchise record with his fifth straight win.

“It’d been a while since I had an attempt at the AHL level, I was 2/2 in the NHL, but I’ve been so snakebitten, I needed one of those to go in.  I missed the shot, I saw it eventually was going to go in and I just thought it was so fitting for it to be the game-winning goal.”

Make it 14 goals this season for the Roadrunners’ power play, third best in the American Hockey League.

Despite them starting 0/6 on it Friday night, timing is everything and it was only one that was needed on a late man advantage to force OT.

He was the first to admit post-game that he whiffed on the shot, but that’s not what’s important. In the bottom of the ninth, no baseball reference intended, Beau Bennett played the role of closer and sent the Tucson crowd home happy, moving to 5-0 on Friday’s and Saturay’s at Tucson Arena.

Put your hands up, Beau. You’ve won it. 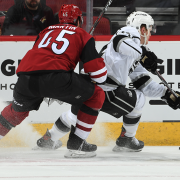