24 hours after extending their Pacific Division-leading record to 16-5, the Roadrunners wrapped up the second half of a back-to-back against the Colorado Eagles in similar fashion, this time by a score of 2-1 to improve to 17-5.

To the delight of many Tucson fans, a goaltending matchup between Adin Hill and Hunter did not disappoint Wednesday night, as the two both made timely saves to keep the affair a low-scoring one.  After the fourth-year Roadrunner began the contest with a few crucial stops, Colorado did strike first on a modified breakaway.

Fortunately for the home club, it was the only one that would get by Hill the entire evening. The 6-foot-6 netminder locked in and went a perfect 25/25 over the final 40 minutes, totaling an evening in which he stopped 33 of 34 shots faces.

At the other end of the ice, Brayden Burke took Tucson from behind to ahead during the middle period, scoring twice.

First, a wonderful display of patience from Beau Bennett coming up the left wing allowed Burke to jump back up into the play, creating a two-on-one in which the latter would capitalize upon.

Roughly ten minutes later and on the man advantage, sustained pressure and persistent puck movement from Tucson led to a chance for Nick Merkley from the glove-side circle to Miska.  While Merkley’s shot was knocked down in front, Bennett earned the primary assist by sliding it back door to Burke for his second of the night, into an essentially empty net.

For Burke, it was not only the game-winning goal but also his seventh straight game with a point, becoming the first Tucson player to do so this season.

“We had a tough game in San Diego on Saturday.  We came home, wanted four points and we came out with two pretty good efforts.”

The provider of Tucson’s offense, Brayden Burke, sharing the accomplishment of the team’s sweep over Colorado just days after suffering a tough loss to San Diego, their I-8 Rival.

After Saturday, you could sense both the players and coaches getting antsy to get back into game mode.  They showed why Tuesday and doubled down on it again Wednesday. Cliché, yes, but the team really dislikes losing and they have a confidence going about them now that they can take on anyone at the moment.

They showed that over the past two nights and now they’ll hit the road to try and prove it four more times.

The goaltending duel was apparent from the get-go, as we knew both of the two netminders would try and get the best out of one another.  Just minutes into the game, check out Hill making a big stop.

As prefaced, Hill was making saves upright, sprawling, from his back.  #33 showed some serious range in Wednesday’s win. 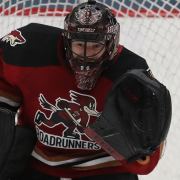