Tucson Notes
Through three seasons of play in Tucson, Hill leads the organization among all goalies in wins (51), shutouts (8), save percentage (.908%) and minutes played (6,236). 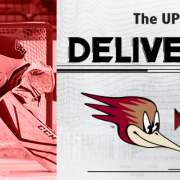