Another excellent first period paved the way for the Roadrunners 15th win in 19 games Wednesday night, feasting on the Bakersfield Condors 8-3 at Mechanics Bank Arena.

Matching a franchise record with five goals in the first period, Jon Martin got the scoring underway just 2:42 into the first meeting of the season between the two sides.

A goaltending change and a timeout for the Condors proved to provide no further success for them, as then Beau Bennett chimed in with his fourth of the season on his 28th birthday.

Concluding the scoring blitz, Jordan Gross became the third Tucson blueliner of the period to score, finishing a feed from Lane Pederson.

Bakersfield would add a pair of goals in the second in addition to their late first period goal, however, 5-3 was as close as they would cut the lead through the remainder of the contest.  Tucson picked up in the third right where they had left off in the first, once again furthering their lead via captain Michael Chaput.  The forward became the only member of the team to score twice in the effort, doing so in succession to put his club back ahead 7-3.

Wrapping up the eight spot was Tyler Steenbergen, who accepted a pass from Hudson Fasching and buried upstairs past Dylan Wells to put a bow on things.  For Fasching, his pair of assists extended his personal scoring streak to six games, matching this season’s record thus far, previously established by Lane Pederson.

Additionally, another helper for Brayden Burke moved his total to 19 points in 19 games and defenseman Dysin Mayo tacked on his second three point performance of the season.

Backstopping the victory was goaltender Ivan Prosvetov, who was making his first start for Tucson in 25 days after being reassigned to Rapid City earlier in the month.  The impressive first-year netminder swatted away 36 Bakersfield attempts to advance to 4-1 in his first five games.

“In the second period it kind of got away from us defensively, we gave them too many good looks.  Our first period we pushed the pace well and in the third we settled it but Ivan did a good job of keeping us in it in the second.”

Roadrunners defenseman Dysin Mayo elaborating on what went right early and late and his goalie.

After starting the year with Antti Raanta, then returning to Adin Hill, watching the blossoming Ivan Prosvetov take stage and being blessed with a perfect two weeks from Eric Comrie, goaltending has received a lot of love for Tucson this year.

However, it’s time to take notice of the offense.  The Roadrunners had only scored eight goals in a game one time through their first three seasons.  This year? They’ve done it three times in 19 games. They’ve scored 48 goals in ten games this month.  They’ve moved to second in the entire AHL in goals for, only behind Milwaukee, the league’s other team with 15 wins.

With contributions from all across the board, the scoring department of this club is en fuego.

How could you not be pleased with the goal scoring prowess Jon Martin has brought to this Tucson club?

In the midst of his team’s offensive flurry, Ivan Prosvetov looked as if he hadn’t lost a step, winning his first start with Tucson in over two weeks since returning from Rapid City. 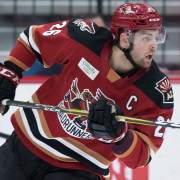