Man Up, Man Down

Following Saturday’s overtime victory over Iowa, defenseman and overtime hero Jordan Gross remarked that “it’s the team’s goal to stay out of the penalty box” and for the Roadrunners “play their best at five-on-five”.

The club came up short on both of the those goals on Tuesday as their five-game win streak was halted at the hands of the Chicago Wolves.

All three goals scored in the contest came on special teams, with a power play tally going to both sides and the eventual game-winner shorthanded.

Late in the first period with Robbie Russo in the box for a trip and Brayden Burke serving a too many men minor, the Wolves won an offensive zone draw to the left of goaltender Ivan Prosvetov, who was making his first set of consecutive starts in his young career, zipped it around their setup of skaters and Dylan Coghlan hammered a one-time drive home for a first period Chicago lead.

3:52 into the second the Roadrunners provided an answer, coming in the form of a redirection goal from Tyler Steenbergen.  Generated from the wall to the point by Brayden Burke, Jordan Gross’ drive changed directions in front of Oscar Dansk and we had a tie in the middle portion.

The decisive marker came again with Tucson on the power play, except this time it was the opposition cashing in.  After Beau Bennett made an outstanding play to break up a near two-on-one, Reid Duke corralled the puck behind the Roadrunners net, peeled to the glove side of Prosvetov and spun a shot on that perhaps the young netminder wasn’t expecting, as it took a strange hop off of his equipment and past him to conclude the evening’s scoring.

With just three goals in the contest, again, all on special teams, goaltending was up to par inside Tucson Arena for the large majority of the game, as Oscar Dansk picked up the win for Chicago by way of 29 stops on 30 shots, while Ivan Prosvetov suffered his first pro loss from two goals against on 28 shots.

“We were a little too laid back.  We were on a win streak and we had confidence.  We didn’t put the work in in the first 10, 20 minutes.”

Captain Michael Chaput speaking blatantly about his team’s effort in the defeat.

Chicago brought their organizationally trademarked “tough to play against style” but now on Wednesday we’ll get to see the resolve of the Tucson club who will look to bounce back from just their second loss of the season.

At worst, a 4-2 home stretch to start the season is certainly acceptable but the club will have to bring a good performance in order to achieve 5-1.

Make it six out of eight for the power play in terms of games with a goal thus far this season. Steve Potvin’s unit has achieved success and tonight it came from a good net-front presence by 5-foot-10 Tyler Steenbergen.  As we’ve seen in years past via Conor Garland, the day in age of being a big guy to be in front of the goalie is no longer applicable.

A synopsis of the hard-fought battle it was, Chicago’s Nic Hague stands atop Hudson Fasching following an effort between the two. 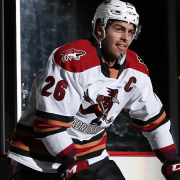 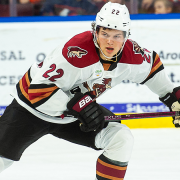