In what turned out to be the second-longest shootout in American Hockey League history, the Roadrunners earned a 2-1 win over the San Antonio Rampage Friday night to improve to 20-5.

The tone was set from the get-go as Ivan Prosvetov and Ville Husso combined to stop the first 32 shots on goal, establishing a goaltending battle inside the AT&T Center.

A scoreless affair gave way at the 10:59 of the second period when Kelly Klima, returning to the lineup following a brief loan to Rapid City (ECHL), cut through the slot and got a wrist shot to go in, giving Tucson a 1-0 advantage.

Minutes later in the middle period though, the only other goal of regulation came from San Antonio’s captain, Jordan Nolan, who was able to squeak a shot under the armpit of Prosvetov, bringing the game back to even.

No scoring in the third period forced overtime and despite the Roadrunners spending 4:12 of the extra frame on the power play because of a Klim Kostin spearing major inside the final minute, no game-winner was found there either and a shootout was needed.

Both teams found the back of the net in the opening three shots, beginning with Jordan Gross for Tucson in the bottom of round one. Gross’ signature move was followed by a goal from Joey LaLeggia of San Antonio though, eventually forcing sudden death.

LaLeggia’s tally was the only one that would get by Prosvetov in the extra session, as the 20-year-old Russian would then turn away 13 consecutive attempts, providing the Roadrunners with a dozen opportunities to win the game before Nate Schnarr closed it out in the bottom of the 15th round.  A shot low to the blocker side of Husso wrapped up the Roadrunners longest shootout in team history and moved their win percentage to .800.

Prosvetov completed the evening with 26 stops on 27 attempts in regulation plus overtime, then the 14 of 15 during the one-on-one competition on his way to the win.  With a record of now 7-1 in eight games played, Prosvetov’s .944 save percentage also now ranks atop all AHL goaltenders.

As a team, Tucson has now won five in a row for the third time already this season.  Additionally, this now moves the Roadrunners to 5-0 in games that extend beyond regulation in 2019-20.

“Obviously a little bit nerve-wracking going in there, but Ivan making the save beforehand really took the pressure off of me.  It let me go in, make my move and I committed to the shot before and I got lucky it went in. It’s a good feeling to get the two points.”

Game-winning goal scorer Nate Schnarr showing love to his netminder while also describing the emotions of what it was like to seal the deal for his team en route to their fifth straight win.

Head Coach Jay Varady often uses the mantra “next man up”.  The Roadrunners lost their leading point scorer earlier in the day Friday with Brayden Burke being recalled to the Coyotes, thus opening a forward spot for Tucson.  Who slid in? Kelly Klima.  Who scored the Roadrunners lone goal tonight?  Kelly Klima.

A nice job taking advantage of an opportunity by number six.

Is there really any other choice?  While Ivan made some outstanding saves, you have to see the game-winner in the bottom of the 15th from Schnarr.

Locked in, as he was all night, the first-year success of Ivan Prosvetov continues to grow. 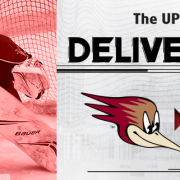