Using multiple power play goals and a strong performance in net from Adin Hill, the Roadrunners extended their win streak to six games for the first time in franchise history Saturday night with a 3-1 win over the Texas Stars.

Saturday night’s scoring began with the fourth point in as many games for Jeremy Gregoire, who jammed home a loose puck on a third-effort in front to give Tucson a first period lead.

While Texas would even the score before the first intermission by way of a power play goal, the Roadrunners answered with a goal of their own on the man advantage to start the second.  Michael Bunting twisted a feed behind his back to Andy Miele, who was left unprotected on the back door, serving as the game-winning goal.

Miele’s tally was the first of two on the power play Saturday night for the Roadrunners, as the insurance goal also came on the man advantage from Beau Bennett.  A fake slap shot from Vili Saarijarvi earned him his first point as a member of the club, instead opting to pass to a streaking Bennett through the circles for his fifth of the season.

The star of the evening for the winning club was undoubtedly goaltender Adin Hill though.  With several timely saves that kept his team in the lead, the 6-foot-6 netminder went 21 of 22, denying every even strength chance thrown his way.

“We made a couple adjustments, obviously because we had to due to the recalls, but it seems to be the right adjustment to each power play.  We’re extremely happy that both units got a goal tonight because special teams are so important.”

The defensive group and goaltenders were the best of the best over the course of this four-game swing against a fair of tough Central Division opponents.  Keep in mind, entering Saturday’s game, Texas was 8-1-1 in their last ten, the second hottest team in the AHL only to the … Tucson Roadrunners.

As mentioned, Adin was fantastic again in the win, gobbling up several pucks that would’ve beat many netminders.  Going to the split and flashing leather, here’s a late second period save to keep his team ahead by one.

Beau Bennett was outstanding again Saturday night, tallying his 11th point in his past ten games with his third period goal. 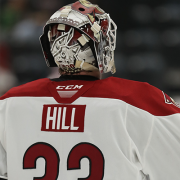