Kyle Capobianco
A two-time AHL All-Star, Capobianco becomes a Roadrunner once again following a year in which he tallied 32 points in 40 games before being recalled by the Coyotes.

Jordan Gross
Entering his second professional season, Gross will look to continue his growth in Tucson. 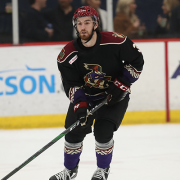