Friday night forward Hudson Fasching scored both his first and second goals of the season in the team’s win at Stockton. Sunday, he added his third in two games.

Goaltender Eric Comrie made it two wins in two starts Friday night, having now won two of his three appearances since joining the team from the Coyotes on a conditioning loan.

“It was a great game.  I think it was one of our better games of the whole year.  We played a full 60 minutes, stayed tight-knit and came away with the result we wanted.” – Roadrunners forward Tyler Steenbergen sharing his thoughts on Friday’s win post-game.

“The push back right after a goal for or against is huge.  The next shift is what leads to the next shift and it compounds.  It sways the momentum for the rest of the period.” – Roadrunners defenseman Kyle Capobianco describing the importance of the Roadrunners scoring immediately following both Stockton goals Friday night in the win.

The team will now have an off day Monday, practice day Tuesday, game in San Jose again Wednesday and a travel day back to Tucson on Thursday.

Get a special Hockey Fights Cancer ticket package featuring a branded purple beanie and a ticket for just $23.

The team will wear their Kachina Jerseys for the first time. Make sure you’re there to be part of the craze.

Roadrunners Happy Hour hosted by Adrian Denny 6-7 p.m. airs every Wednesday on Fox Sports 1450 with two special guests. This week’s show will originate live from SAP Center and lead fans directly up until face-off at 8 p.m.

The Arizona Coyotes moved into sole possession of second place in the NHL’s Pacific Division following their 3-0 shutout victory over the Calgary Flames on Saturday in Glendale.  The team is now 12-7-2 through 21 games. 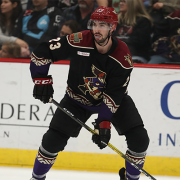