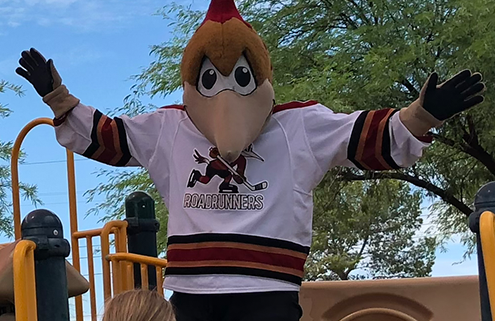 LEADING OFF
Another fun signing this week with Blake Speers, who came over in the December trade, signing a one-year, two-way contract with the Coyotes. We looked at some highlights and heard from him from earlier in the season this week in RRTV Weekly.

WASN’T THAT BLAKE?
Also, if you didn’t catch it earlier this summer, Blake was a featured guest for an episode of “Isn’t That Mike” and we could tell he was excited to return to Arizona for another season after a three month run with Tucson in which he played in all 34 games during that stretch.

Alright, let’s do it, let’s go to the home of our ECHL Affiliate in Rapid City for Road Trip Food Pics. I can go a couple of weeks on this one. The home of the Rush has a great downtown of dining options. Let’s start with Tally’s Silver Spoon. Chicken Fried Steak, Pancakes or the Breakfast Burrito and a Pancake for when I feel like eating light. What a spot, learn more about them HERE.

More from Blake, how about this one against San Diego? He was tied for the team lead with three goals against the Gulls in 2019-2020.