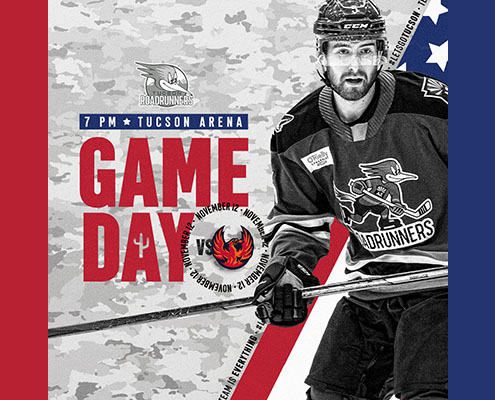 The Tucson Roadrunners will wrap up the first series of their six-game home stand Saturday night, as they’ll face off once again with the Coachella Valley Firebirds. Tucson will look to win seven of their first ten games for the fourth time in seven seasons, as the team is once again in an early-season hunt for first in the AHL’s Pacific Division at 6-3-0-0. Saturday’s game will be televised live in Southern Arizona on The CW Tucson, for the first of six televised Roadrunners games this season. The game will also be Tucson’s Military Appreciation Night presented by VetTix, with the team wearing their Military Specialty Jerseys for the game.

Three Things
1) Tucson and Coachella Valley enter Saturday’s series finale tied for third in the AHL Pacific Division with identical 6-3-0-0 records. Despite Friday’s loss, the Roadrunners and Firebirds were even while at five-on-five with one goal apiece. Coachella Valley improved to 4-1-0-0 on the road this season with the win, scoring the first goal of the game for the seventh time in nine total contests this season. Tucson remains undefeated when scoring first, with the opening goal in five of their nine games this year. The Roadrunners were also the last team in the AHL to lose a home game, as Tucson and the Rochester Americans both entered Friday without a home loss before falling to the Firebirds and Cleveland Monsters on home ice.

2) In Friday’s series opener against the Firebirds, the Roadrunners had a player making his season debut, a player making his home season debut, and a player making his first appearance with Tucson. Forward Liam Kirk took the ice for his first regular season outing since November 6, 2021. The 22-year-old tallied three points (2g 1a) in four home games in his rookie season with Tucson, after being drafted by the Arizona Coyotes in the 2018 NHL Entry Draft. Another player known for his home heroics is forward Ben McCartney, who skated in his first home outing this season on Friday against Coachella Valley. McCartney began last season with a hat trick in Tucson’s Home Opener against Texas on October 23, 2021, before the 21-year-old went on to finish second on the team in goals with 18. On defense, Conor Timmins made his first appearance in a Roadrunners uniform on Friday, as the 24-year-old is in Tucson from the Arizona Coyotes for conditioning purposes.

3) Saturday marks an important date on the Roadrunners 2022-2023 schedule, as the team will celebrate Military Appreciation Night presented by VetTix. Tucson will be wearing their Military Specialty Jerseys during the game, which will then be auctioned off immediately after the series finale with the Firebirds. Prior to the game, the team will host a Hockey & Hops event outside the Tucson Arena, with several local breweries serving samples. Earlier this week, Roadrunners players Cam Dineen, Colin Theisen, and Tyson Empey visited Southern Arizona VA Healthcare in Tucson to thank local Veterans for their service and give them Roadrunners Gift Bags.

“It’ll be a fun one, I think we’ll have a good crowd. Everyone on our team is excited to wear (the Military Specialty Jerseys) and represent. I remember getting out (to Southern Arizona VA) a couple years ago and it was a good time. We appreciate everything they do.”

Number to Know
6 – The number of Roadrunners games this season that will be televised live in Southern Arizona on The CW Tucson, starting with Saturday’s matchup against the Coachella Valley Firebirds. This is the third season with select Roadrunners contests featured on The CW Tucson, as “Voice of the Roadrunners” Adrian Denny will be joined by “Roadrunners Happy Hour” co-host Brett Fera.

We’re Doing It Live
Tonight’s game will be televised live in Southern Arizona on The CW Tucson, as well as the usual broadcast on AHLtv. The game will also be on the radio on FOX Sports 1450AM and the iHeartRadio app. Coverage will start at 6:45 p.m. with Roadrunners Warm-Up hosted by Jimmy Peebles, before “Voice of the Roadrunners” Adrian Denny and the Arizona Daily Star’s Brett Fera have all the action from the Tucson Arena.