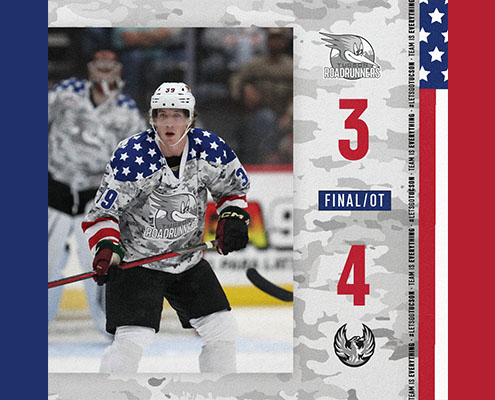 Tucson, Arizona – The Tucson Roadrunners faced off with the Coachella Valley Firebirds Saturday night in front of a crowd of 4,388 at the Tucson Arena, closing out a two-game set with the AHL affiliate of the Seattle Kraken. The Roadrunners picked up a point in the standings as they fell to the Firebirds in overtime by a score of 4-3. Tucson Forward Mike Carcone extended his team lead for points to 14 (4g, 10a) with a goal and an assist. After Saturday’s contest, the Tucson Roadrunners raised nearly $30,000 in their postgame Military Jersey auction with all proceeds going to VetTix, an organization that provides tickets to sports games, concerts and other events to Veterans and their families.

Roadrunners Captain Adam Cracknell put Tucson on the board just ten seconds into Saturday’s rematch with the Coachella Valley Firebirds, giving the 37-year-old the fastest goal to start a game in Roadrunners franchise history. The score was Cracknell’s third time lighting the lamp this season, while linemate Mike Carcone earned his team-leading tenth assist and defenseman Victor Soderstrom picked up his fourth.

DRAWING PENALTIES – The Tucson Roadrunners were awarded seven of the ten power-plays in Saturday’s series finale against the Coachella Valley Firebirds, with Mike Carcone capitalizing on the man-advantage late in the first period. The goal was Carcone’s third scored on special-teams this season, as the third-year Roadrunner has factored into each of the first seven power-play goals netted by Tucson this year.

The Tucson Roadrunners celebrated Military Appreciation Night Saturday at the Tucson Arena as they wrapped up a two-game set with the Coachella Valley Firebirds. The team wore their Military Specialty Jerseys for the contest before auctioning them off to fans after the game. All proceeds from the auction went to VetTix, an organization that provides tickets to sporting events, concerts, performing arts and family activities aimed at improving mental welfare and enriching the lives of military service members and veterans. Saturday’s game was also televised live in Southern Arizona on The CW Tucson and featured a pregame Hockey & Hops event outside the Tucson Arena prior to the contest.

Roadrunners Forward Mike Carcone on Saturday’s series finale with the Coachella Valley Firebirds. Carcone tallied a goal and an assist to extend his team lead for points to 14 (4g 10a).

After dropping a series opener for the first time this season Friday night, the Roadrunners came out firing in game two of the set. Tucson Captain Adam Cracknell netted his third goal of the season just ten seconds into the contest for a 1-0 Roadrunners lead and the fastest goal to start a game in team history. Travis Barron added to that advantage with just under three minutes gone by in the opening frame with his first goal of the season. Barron’s goal proved to be important in the early goings, as the Firebirds got on the board just 2:09 later to cut Tucson’s first-period lead to 2-1. The Roadrunners pushed the advantage back out to two goals with a power-play strike by Mike Carcone, his fourth goal of the season. With the score, the third-year Roadrunner factored into his seventh-straight Tucson power-play goal to open the season. Coachella Valley once again answered back with a score 2:07 after the Carcone strike to keep the Roadrunners lead at a single goal heading into the first intermission. After an opening period with five combined goals between Tucson and Coachella Valley, the middle frame of Saturday’s series finale was the first period of the weekend without a goal scored. Despite the scoreless second, the Roadrunners were able to increase their shots on goal from eight to 15, while reducing the Firebirds shots on netminder Jon Gillies from seven to just two. Through 40 minutes of play, Tucson had outshot Coachella Valley 23 to nine and held onto a one-goal lead entering the third period. Saturday’s scoring drought was broken with 8:11 gone by in the third period, as the Firebirds scored the first goal since the final 5:15 of the opening frame to tie the contest up at 3-3. The series finale between Coachella Valley and Tucson came down to the wire, with the game still deadlocked at three at the end of regulation. The Firebirds took a power-play into the three-on-three overtime period and scored the game-winning goal with 26 seconds gone by in the extra frame to secure a 4-3 victory.

Tucson Roadrunners Road Ahead: Four More In Our House
Scroll to top