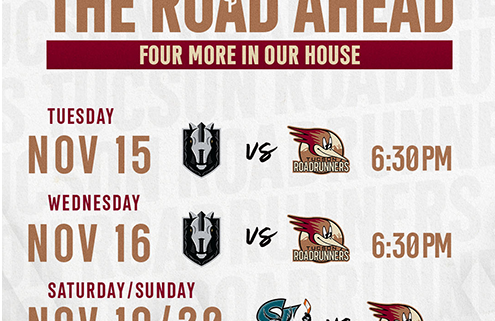 The 6-3-1-0 Roadrunners continue their six-game home stand with a pair of two-game sets against the Henderson Silver Knights and San Jose Barracuda. Tucson opened the season with a series split against the Silver Knights in Henderson, who have since dropped to 3-10-0-0 on the year. The AHL affiliate of the Vegas Golden Knights will be looking for their first win streak of the season on Tuesday after defeating the Abbotsford Canucks 3-2 on the road on Saturday. Following the midweek series with Henderson, the Roadrunners will welcome the San Jose Barracuda to town on Saturday, November 19, and Sunday, November 20. Tucson will look to remain undefeated against the AHL affiliate of the San Jose Sharks this season, after a weekend sweep of the Barracuda to close out the month of October.

Tucson enters the week 2-1-1 at home, good for the fourth-best record on home ice in the AHL’s Pacific Division. Their .650 overall winning percentage is the third highest in the division behind their two previous opponents at the Tucson Arena this season: Coachella Valley (.700) and Bakersfield (.682). The Roadrunners power-play is currently the third best in the Pacific Division on home ice at 23.8%. Tucson is one of three teams in the division (Calgary, Ontario) to average more than a power-play goal per-game at home, with five in four contests at the Tucson Arena.

The Roadrunners welcome the Henderson Silver Knights to town with the first $2 Twos-Day and Kids Free Wednesday of the season on November 15 and 16. They’ll wrap up the home stand coming up this weekend with Hockey Fights Cancer Night on Saturday, November 19, against San Jose, with the second Family Day of the season the following afternoon. For more information and to purchase tickets for the rest of the home stand, click HERE.

Honoring Those Who Serve

The Roadrunners honored local Veterans with Military Appreciation Night on Saturday at the Tucson Arena. The team wore their Military Specialty Jerseys for the series finale against the Coachella Valley Firebirds, before auctioning them off to fans after the game. Nearly $30,000 was raised in the postgame auction, with all proceeds going to VetTix, an organization that provides tickets to sporting events, concerts, performing arts and family activities aimed at improving mental welfare and enriching the lives of military service members and veterans.

Mike Carcone extended his team lead for total points this season on Saturday against the Coachella Valley Firebirds, tallying a goal and an assist. The third-year Tucson forward has four goals and ten assists through ten games this season and is one of 15 players in the AHL to already reach double-digit assists on the year. Carcone’s 1.40 points per-game is tied for fifth-best among American Hockey League players with at least ten outings this season, and the 26-year-old has factored into all seven Tucson power-play goals this season.

Tucson Captain Adam Cracknell set a franchise record Saturday night against the Firebirds, scoring the fastest goal to start a game in Roadrunners History. Cracknell lit the lamp with his third goal of the year just ten seconds after the opening face-off, as the 37-year-old now has each of Tucson’s fastest goals to start a game this season. Cracknell’s goal 57 seconds into the Roadrunners Home Opener on October 22 was the previous fastest score to start a game on the year, coming against his former team in the Bakersfield Condors.

First-year Roadrunners forward Jean-Sebastien Dea put Tucson on the board in Friday’s series opener with the Coachella Valley Firebirds, giving Dea the active team lead for goals scored with five. The 28-year-old led the AHL affiliate of the Montreal Canadiens, the Laval Rocket, in goals last season with 26. Dea is now tied for the overall team lead for goals with forward Laurent Dauphin, who was recalled by the Arizona Coyotes prior to the start of Tucson’s current home stand and made his season debut with the Coyotes on Sunday against the New York Rangers.

Tucson’s upcoming opponents, the Henderson Silver Knights and San Jose Barracuda, will represent the first teams the Roadrunners will face for a second two-game series this season. Tucson opened the year with a series split in Henderson, before sweeping a two-game set with the Barracuda in San Jose two weeks later. The Roadrunners have two one-goal wins this season, with one apiece against both Henderson and San Jose.

Tucson Roadrunners Happy Hour airs every Tuesday at 5 p.m. on FOX Sports 1450AM and the iHeartRadio app, with a podcast version also available after each episode on the iHeartRadio app. This week, co-hosts Adrian Denny, Brett Fera, and Kim Cota-Robles will be live from the Tucson Arena with a special extended edition of Happy Hour before the Roadrunners face off with the Henderson Silver Knights at 6:30 p.m. In addition, a new episode of the Tucson Roadrunners Insider Podcast released on Sunday breaking down the start of Tucson’s home stand and looking ahead to the rest of the week. “Voice of the Roadrunners” Adrian Denny and TucsonRoadrunners.com’s Jimmy Peebles discussed the confidence within the team’s leadership group and coaching staff. The podcast, including exclusive interviews with Travis Barron, Colin Theisen, Tyson Empey, and Team President Bob Hoffman, can be found on the iHeartRadio App.