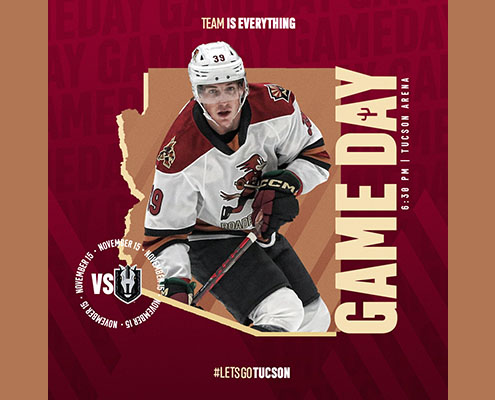 The 6-3-1-0 Tucson Roadrunners continue their six-game home stand Tuesday night, with the first of back-of-back matchups with the Henderson Silver Knights at the Tucson Arena. The Roadrunners opened the season on the road against Henderson October 14 and 15, splitting the weekend set with the Vegas Golden Knights AHL affiliate before rolling off five consecutive wins. Tuesday’s game also marks the first $2 Twos-Day of the season, with half-priced tickets available at the Tucson Arena Box Office and $2 draft beers and $2 popcorn during the game.

Three Things
1) Tucson took the first meeting of the year against the Henderson Silver Knights on Friday, October 14, by a score of 2-1, their first of two one-goal wins so far this season. The Roadrunners went a perfect six-for-six on the penalty-kill in the contest, which remains their best performance against an opposing power-play on the year. Goaltender Ivan Prosvetov earned his first of four-straight wins to open the season as the starting backstop, stopping 29 of 30 shots faced. The outing also represented one of Prosvetov’s three starts this year where he’s allowed just one goal.

2) In the series finale with the Coachella Valley Firebirds on Saturday, Roadrunners forward Mike Carcone recorded his fifth multi-point outing through just ten games this season. The 26-year-old leads Tucson in points with four goals and ten assists, and is fifth in the American Hockey League for points per-game among players with at least ten games played at 1.40. in addition, Carcone’s team-leading six-game point streak from October 15 to November 2 began with a pair of assists against the Silver Knights. His six points (2g 4a) in four games at home this season lead the team.

3) Returning to the Roadrunners roster ahead of Tuesday’s series opener with the Silver Knights is forward Laurent Dauphin. Dauphin is back with Tucson after being recalled by the Arizona Coyotes prior to the start of the Roadrunners current home stand. The 27-year-old made his season debut with the Coyotes on Sunday against the New York Rangers and returns to Tucson tied with Jean-Sebastien Dea for the team lead in goals with five. Dauphin joined Arizona on their current 14-game road trip directly from the Roadrunners four-game stint on the road at the time, combining for eight games in 19 days as the visiting team. In Tucson’s first home stand of the season, Dauphin notched five total points (4g 1a) across two outings, including his first career AHL hat trick as the Roadrunners swept the Bakersfield Condors October 22 and 23. The two-game set at the Tucson Arena also represented Dauphin’s first games back in the state of Arizona as a member of the Coyotes organization since 2019, after being drafted by the Coyotes in the 2013 NHL Entry Draft.

“We’re thankful to be in this position with players that can step in and do the job. The bulk of our season is coming up and it’s going to intensify. We need bodies, we need players that are able to play the game at a high pace. We’re thankful for management making sure that we’re going to be a strong, deep team this season.”

Tucson Head Coach Steve Potvin on the depth of this season’s Roadrunners team that is off to their best start since the 2019-2020 campaign (7-3-0-0).

We’re Doing It Live
Tonight’s game will be broadcast on AHLtv, as well as on the radio on FOX Sports 1450AM and the iHeartRadio app. Coverage will start at 5:00 p.m. with a special pregame edition of Roadrunners Happy Hour with Adrian Denny, Brett Fera, and Kim Cota-Robles. Joining the show will be a special guest, Tucson defenseman Cam Dineen. Coverage will continue at 6:15 p.m. with Roadrunners Warm-Up hosted by Jimmy Peebles, before “Voice of the Roadrunners” Adrian Denny has all the action from the Tucson Arena.