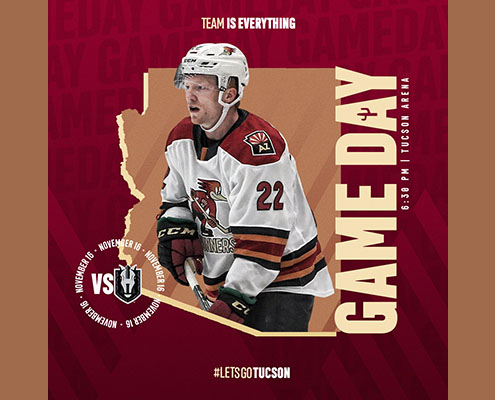 The 6-4-1-0 Tucson Roadrunners wrap up their midweek series with the Henderson Silver Knights Wednesday at the Tucson Arena. The Roadrunners will be looking to even up both the midweek series and overall season series with the Vegas Golden Knights AHL affiliate, after Henderson took the series opener on Tuesday. Wednesday marks the first Kids Free Wednesday of the season, as all kids 12 and under can get a free ticket to the game with a paying adult at the Tucson Arena Box Office.

Three Things
1) Tucson dropped the series opener with the Silver Knights on Tuesday, as they entered the third period trailing 2-1 before a five-goal period by Henderson. Prior to the final 20 minutes of action on Tuesday, the Roadrunners had narrowly outshot the Silver Knights 20 to 19 and had held Henderson without a goal since the final 8:04 of the first period. The scoreless second period on Tuesday was the first period without a goal between the Roadrunners and Silver Knights since the third period of their season opener on Friday, October 14. Tucson and their opponents have combined for an average of 7.2 goals per-game through five home tilts this season.

2) The Roadrunners got on the board first in Tuesday’s clash with the Henderson Silver Knights, marking the sixth time in 11 games where Tucson scored before their opponent. The Roadrunners are 5-1-1-0 in games where they scored first, with three goals in the opening 4:20 of the first period across their last two contests. Lighting the lamp first in Tuesday’s series opener was Tucson forward Ben McCartney for his first goal of the season, with assists going to Jean-Sebastien Dea and Will Reilly. The assist made Dea the second Roadrunner to reach ten points on the year (Mike Carcone) and the only Tucson skater with at least five goals and five assists, while Reilly’s assist was the 25-year-old’s first point since arriving in the desert this offseason.

3) Tuesday’s series opener with the Henderson Silver Knights was the fourth time in the last five games where the Roadrunners drew as many or more trips to the power-play than their opponent. Over their last two games, Tucson has been on the man-advantage 12 times compared to seven times for their opponents. In five home contests this season, the Roadrunners have gone on 26 total power-plays for an average of 5.2 times per-game, they also average a power-play goal per-game on their home ice with five so far this season at the Tucson Arena.

“Getting mentally ready. A lot of this game is mental. We play a lot of games during the year, I think you just have to be ready every single day. There should never be excuses, we just have to be mentally prepared and that’s what we’re going to do.”

Tucson forward Ben McCartney on what the players can do between games of a back-to-back series, after the Roadrunners and Silver Knights faced off Tuesday night in the series opener.

Number to Know
25 – The number of players to take the ice for Tucson through three games on their current home stand. The only new addition to Tuesday’s lineup was forward Laurent Dauphin, who returned to the Roadrunners roster from the Arizona Coyotes after being recalled prior to the home stand. In addition, Tucson has had 16 different players score a goal through 11 games this season, after Ben McCartney lit the lamp for the first time this season in Tuesday’s series opener with Henderson.

We’re Doing It Live
Tonight’s game will be broadcast on AHLtv, as well as on the radio on FOX Sports 1450AM and the iHeartRadio app. Coverage will begin at 6:15 p.m. with Roadrunners Warm-Up hosted by Jimmy Peebles, before “Voice of the Roadrunners” Adrian Denny has all the action from the Tucson Arena.