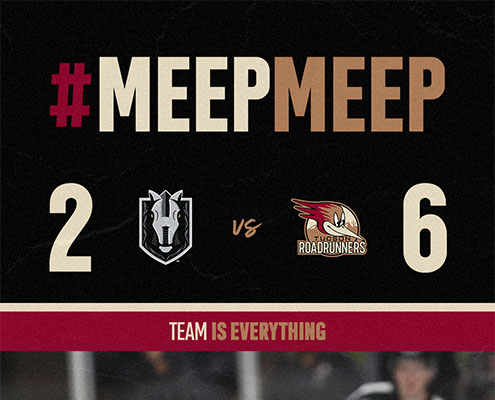 Tucson, Arizona – The Tucson Roadrunners concluded their two-game set against the Henderson Silver Knights at the Tucson Arena Wednesday night, defeating the AHL affiliate of the Vegas Golden Knights by a score of 6-2. The score represents the most goals scored in a game by the Roadrunners this season, as 12 different players recorded a point in the victory. Tucson goalie Ivan Prosvetov earned his fifth win of the season, as he stopped 29 of 31 to split the midweek set against Henderson. The Roadrunners improved to 7-4-1-0 on the season, and will host the San Jose Barracuda Saturday and Sunday at the Tucson Arena to close out the home stand.

Roadrunners forward Jean-Sebastien Dea gave Tucson their third of four total goals in the opening frame of Wednesday’s 6-2 win. Dea currently has sole possession of the team lead for goals with six, and his 11 total points trail only Mike Carcone (5g 11a) on the Tucson roster. The score also came on the man-advantage for the Roadrunners, marking their sixth power-play goal at the Tucson Arena in as many games on their home ice.

SPREADING THE SCORING – With Ryan McGregor lighting the lamp for the first time this season in Wednesday’s 6-2 win over the Henderson Silver Knights, a total of 17 different players have scored a goal for Tucson on the season. 12 Roadrunners also recorded at least a point on Wednesday, while Ronald Knot, Mike Carcone, Milos Kelemen, Devante Stephens and Lauren Dauphin all tallied multiple-point performances in the win. In addition, the six goals scored by the Roadrunners in Wednesday’s series finale represent a season-high for most goals in a game for Tucson.

“All the lines are playing the same hockey. It’s not like we have one or two good lines, our whole team is playing well, and I think that’s important for us. If one player isn’t performing well one night, there’s other players that can score for us.”

Roadrunners defenseman Ronald Knot on the depth of Tucson following Wednesday’s series finale with the Henderson Silver Knights. The first-year defenseman tallied his first multi-point outing of the season with a goal and an assist in the 6-2 win

After scoring 4:20 into the series opener with Henderson Tuesday night, the Roadrunners opened the scoring early once again on Wednesday with a goal by Mike Carcone 4:22 into the first period. The score was Carcone’s fifth goal on the season, as Tucson grabbed another early 1-0 lead over the Silver Knights. The Roadrunners extended their early lead with their fifth multi-goal period at home on the year, as Ryan McGregor buried the puck for his first score of the season and a 2-0 Tucson advantage. With the goal, McGregor became the 17th player to light the lamp this year for Tucson. Not long after the Ryan McGregor score, forward Jean-Sebastien Dea took sole possession of the team lead for goals with his sixth of the season and second on the man-advantage, as the Roadrunners led the Silver Knights 3-0 through 13:51 of the contest. Tucson wasn’t finished in the opening frame, as Travis Barron netted his second goal of the season 2:05 later to cap off the second four-goal period of the season for the Roadrunners, as they led 4-0 at the first intermission. Tucson continued to apply pressure by grabbing the first goal of the second period, when forward Ben McCartney tallied his second goal in as many games to give the Roadrunners a 5-0 advantage 6:26 into the middle frame. Henderson got on the board in the final 1:48 of the second period with their first goal of the night, cutting Tucson’s lead to 5-1 entering the final 20 minutes of play. Trailing by four, the Silver Knights opened the scoring in the third period with just 8:31 remaining in regulation, making the score 5-2 in the Roadrunners favor. Tucson answered back less than two minutes later to bring their lead back out to four goals, as Ronald Knot scored his second of the season to help set a season-high for most goals in a game for the Roadrunners as they led 6-2. Knot’s goal earned him his first multi-point performance of the season, while securing a Wednesday-night victory and series split for Tucson.