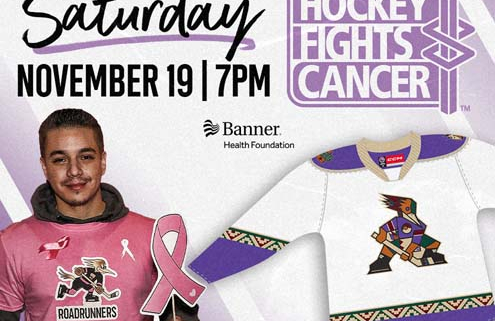 Tucson, Arizona – The Tucson Roadrunners, AHL affiliate of the Arizona Coyotes, will host Hockey Fights Cancer presented by Banner Health Saturday at 7 p.m. and Community Giving Day Sunday at 4 p.m. during their games with the San Jose Barracuda.

On the ice, the team looks to build on a 7-4-1-0 start as they wrap up their six-game home stand after a 6-2 win over Henderson on Wednesday night at Tucson Arena.

As part of Hockey Fights Cancer, the team will debut their brand new White Kachina Jerseys for a special evening as the organization pays tribute to those who have fought or are currently fighting cancer throughout the game to benefit Banner Health Foundation and The University of Arizona Cancer Center. The team is also proud to be partnered with the American Cancer Society for a fundraiser at the game from all tickets purchased HERE.

At the Roadrunners Give Back Table at the top of Section 216, the team will be selling game used signed sticks wrapped in purple tape. The team’s nightly $5 jersey raffle will feature a team signed Roadrunners Fight Cancer jersey from last year’s event with all proceeds going to help our community fight cancer.

In addition, the team is proud to welcome Roadrunners Artist Alejandra Trujillo, who earlier this year, painted a Hockey In The Desert Roadrunners inspired mural as part of a beautification project at the Boys & Girls Club in midtown Tucson. Trujillo will take part in the ceremonial first puck drop and the team will show a video highlighting the process of her painting the mural during the First Intermission.

Also on Sunday, the Roadrunners are unveiling family packs with Rudy’s Texas B-B-Q that include four tickets, four Roadrunners hat and a $25 Gift Card to Rudy’s at TucsonRoadrunners.com/Rudys.

And finally for both games, to celebrate this weekend’s Tour De Tucson, fans can get two tickets and a Roadrunners Cycling Jersey for just $100 HERE.

1-On-1 With Cam Dineen
Scroll to top