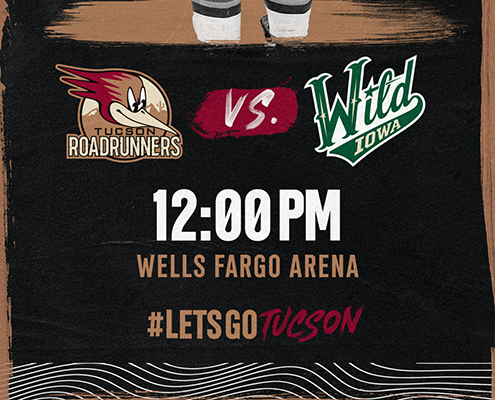 The Tucson Roadrunners will wrap up their weekend with the Wild in Iowa Sunday afternoon, taking on the Minnesota Wild affiliate at 12:00 p.m. MST. Tucson will try to even up the series at one win apiece, after the Wild took the first game by a score of 5-0 Friday night. Tucson has only lost one series this season and will look to keep it that way with a win Sunday.

Three Things
1) The Roadrunners are playing only their second Sunday game of the season and first on the road. Tucson previously hosted Texas on Sunday, October 24, as part of their Home Opening Weekend. The Roadrunners will have a total of nine Sunday games this season. The next Sunday game will be broadcast live on The CW Tucson in Southern Arizona, when Tucson hosts the San Diego Gulls on Sunday, January 2.

2) Joining the Roadrunners this week were forwards Lewis Zerter-Gossage and Avery Peterson from the ECHL. Zerter-Gossage appeared in Friday night’s contest with Iowa and recorded a shot on goal. Zerter-Gossage played for four years at Harvard University, and previously spent time in the AHL with the Hartford Wolf Pack. He recorded a six-point performance in the ECHL with the Maine Mariners last Saturday prior to being signed to a PTO by the Roadrunners. Forward Ben McCartney rejoined the Roadrunners after his second call-up to the Arizona Coyotes of the season, and racked up nine penalty minutes Friday night, including his first fight in the AHL.

3) After last weekend that saw Tucson exchanging hits, fights, and penalties with the Ontario Reign early and often at the Tucson Arena, the Roadrunners kept up with their physical play Friday night, dropping the gloves for four total fights with the Iowa Wild in Des Moines. Ben McCartney, JJ Moser, Mike Carcone, and Boko Imama all got into it with Iowa players, contributing to the 32 total penalty minutes racked up by Tucson the game. Meanwhile, Iowa tallied 38 minutes in the penalty box, including a 10-minute misconduct in the final minute and a half of the contest.

What’s The Word?
Tucson Roadrunners Forward Lewis Zerter-Gossage on what he hopes to bring to this Roadrunners roster:

“When you go to the net you score, so I’m just trying to come in here, play simple, get pucks deep, and hopefully I can get some goals here. That’s the formula.”

Number to Know
29 – The number of saves made by Roadrunners Goaltender Ivan Prosvetov Friday night against the Iowa Wild, tying a season high. Prosvetov previously had 29 saves in the season opener, a 1-0 overtime shutout victory over the Stockton Heat.

We’re Doing It Live
Today’s game will be broadcast live on AHLtv, as well as on the radio on Fox Sports 1450AM, or on the iHeartRadio app. Coverage begins at 11:45 p.m. MST with Roadrunners Warm-Up, as Jimmy Peebles gets you ready for the game before “Voice of the Roadrunners” Adrian Denny has the call at 12:00 p.m. live from the Wells Fargo Arena in Des Moines.