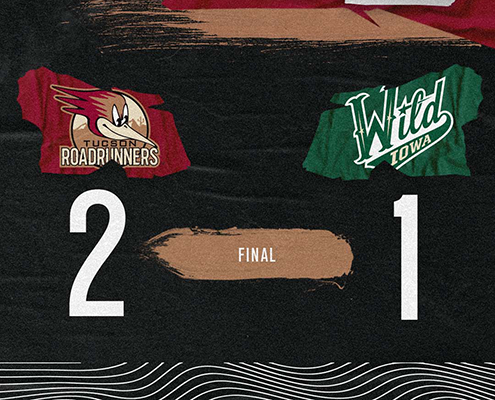 Des Moines, Iowa – The Tucson Roadrunners defeated the Iowa Wild 2-1 Sunday afternoon at the Wells Fargo Arena in Iowa, leading for the final 54:23 of regulation. Tucson handed the Wild their first regulation loss of the season at home. Goaltender Zane McIntyre made his Roadrunners debut, stopping 31 shots and earning his first win of the season, and 113th of his AHL career.

The Roadrunners went on the power-play just nine seconds into the first period, but the first score wasn’t until 5:37 into the opening frame. Forward Matias Maccelli capitalized on a two-on-one rush to give the Roadrunners a 1-0 lead, marking the fourth goal of his rookie campaign. Terry Broadhurst added to the early lead with his first goal as a Roadrunner, making the score 2-0 just 1:11 after the Roadrunners took the early lead. Iowa got on the board late in the period to reduce the Roadrunners lead to 2-1 heading into the first intermission. Tucson had all three power-plays of the first period but scored both of their goals while at even strength. Both teams were held scoreless in the second period despite three-straight chances on the man advantage for Iowa, followed by a pair of power-plays for Tucson in the final 5:18 of the middle frame. Tucson had a great effort to deny the league’s best home power-play of three-straight opportunities. Tasked with holding on to a one-goal lead in the third period, Tucson tightened up their play, staying out of the penalty box and limiting the Wild to six shots on goal. The Roadrunners faced an extra Iowa attacker for the final minute of play but held firm on defense to come away with a hard-fought 2-1 victory, handing the Wild their first home regulation loss of the season.

The Roadrunners will be back home next Friday and Saturday to host the Abbotsford Canucks for the first time in franchise history. Both games begin at 7:00 p.m. MST, and coverage starts at 6:45 on Fox Sports 1450AM with Roadrunners Warm-Up hosted by Jimmy Peebles. Then, “Voice of the Roadrunners” Adrian Denny will have all the action live from the Tucson Arena.

“There were a lot of good things today, obviously. Getting the win, guys were making plays, gaining lines was talked about, and I think we executed well today. Getting pucks deep, getting behind them, and making them play in their own end. It’s always fun when the boys are buzzing down in the other end and scoring goals.”

Roadrunners goaltender Zane McIntyre on the overall team performance in Sunday afternoon’s 2-1 win over the Iowa Wild, his first start as a Roadrunner.

A DOMINANT DEBUT – Tucson Roadrunners Goaltender Zane McIntyre made his debut with the team Sunday afternoon against the Iowa Wild, turning away 31 shots on goal, including 15 in the second period alone, and earning the victory. McIntyre was backed up by fellow 6’5” netminder Ivan Prosvetov, who started Friday night’s game.

Watch Tucson Roadrunners rookie forward Matias Maccelli bury the shot on a two-on-one rush to give Tucson a 1-0 lead, a lead they held onto for the remainder of the contest. The goal marked Maccelli’s fourth of the season, tied for second on the team.

Tucson Roadrunners Forward Terry Broadhurst skates down the bench after scoring his first goal as a Roadrunner. The goal came with 13:12 remaining in the first period and extended Tucson’s lead to 2-0. Broadhurst’s goal ended up as the game winner, as the Roadrunners won by a score of 2-1 over the Iowa Wild.

Tucson Roadrunners Road Ahead: Abbotsford Is Arriving
Scroll to top